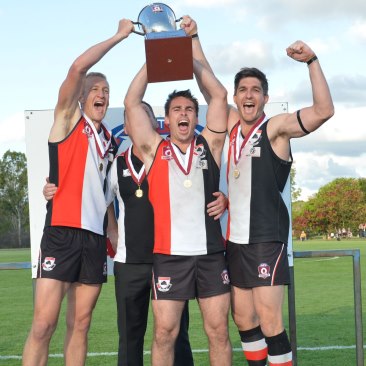 At a glance:  Finished a perfect season with a dominant grand final win and claimed their first premiership since 2010. The Panthers were the first team to go through undefeated since Southport in 1999.

Morningside’s big names – Kinch, Shelton, Upton, Abey, etc – performed to expectation this season, but it was the development of their lesser lights that was crucial to their success. It’s hard to believe players like Rhys Power and James O’Donnell were still eligible for the Rising Star, such is the value they hold to their side . Alastair Nash and Joe Grant Medallist, Lachie Russ, have evolved into genuine match winners this season, while Peter Mollison would certainly have attracted the eyes of NEAFL clubs with his super season in the ruck. These players will be the ones to carry the torch from the side’s stars as they call quits.

What to work on in 2015: The next generation

They need to continue to develop the Panthers players who will pick up from their headliners in the next few years. Players like Daniel Daye, Bill Pendlebury and a host of others will add to their senior games tally in 2015 and the Panthers’ focus should be on making their transition seamless from this group to the next.

He didn’t win the Grogan, but he is very highly rated among the Panthers. Running off the half-back flank, until his forward pocket stint in the grand final, Kinch is regularly tagged, which says a lot about how oppositions rate him as well. Co-captain, Paul Shelton could be up there as well, along with Nick Tomlinson, who has enjoyed some scintillating form this season.

At a glance:  The Tigers stood among the top of the ladder for most of the season, with a 13-5 record giving them a finals double chance. Decimated by injuries during the middle of the year, they kept themselves in the hunt. Two thrilling finals later, they landed in the flag decider, capping off a remarkable turnaround in 2014.

With incredible carnage on their list through the season, the Tigers managed to hang in there incredibly well. They used 52 players over the season, one of the highest tallies in the competition, but still managed to finish third on the home and away ladder. Once their players started to come good in the back end of the season, they showed some of their true quality.

The Tigers need a little bit more in attack. Simon Seddon lit it up in the grand final, but too often the Tigers have had a number of occasions where bags have gotten them over the line. They experimented in the last couple of weeks and sometimes it looked genius but sometimes it fell flat. Seddon needs a regular position and their keys need a bit more support.

Ryan Davey has been the standout of the Tigers team this year, but missing seven games will probably hurt him more in the club count than it did in the Grogan Medal. Tom Daniel has been sensational in a very strong Tigers backline, as has his former Southport teammate, Kurt Niklaus.

At a glance: The Lions were the only side from the 2013 SEQAFL Div 1 comp to crack the finals this season, finishing second after the home and away season. One of the most highly-rated sides all season and finished just a kick from the grand final.

Palm Beach had a few new faces this season that became key parts of their side, but it was the performance of that next generation which will give the Lions a lot of confidence about where they’re headed. Brad Scheer is the obvious one, but also players like Thomas Thynne and Jed Harrison who are developing into consistent senior players.

With Daryn Cresswell headed to Wodonga in the Ovens and Murray League, the challenge for the Lions will be to maintain their progress, and further it. The appointment of the right coach and continuing the development of that next generation will be the key to the Lions’ possible future success.

Palm Beach captain, Jesse Derrick, has had another super consistent season and finished second in the Grogan Medal, but he hasn’t been named in the best too many times this season. Bryant was a revelation this season and added a lot of the Lions side. Kristen Higgs could be up there as well, after a 33-goal return this season – a good effort for a small forward.