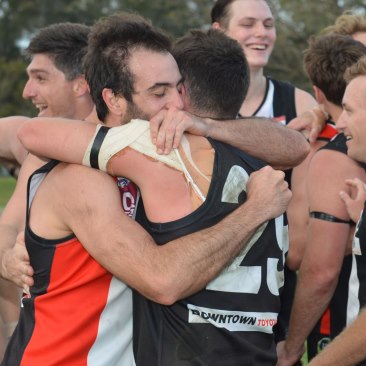 Morningside’s Nick Tomlinson entered a league of his own when he collected a club-record fifth senior premiership in the QAFL on Saturday.

The 2003-04 and 2009-10 premiership player stood alongside Jarrod Price, Jacob Gough, David Lillico, Shaun Mugavin and Dean Edwards, as a four-time premiership winner, but Saturday’s win puts him ahead of the rest, while co-captain Kent Abey added a fourth to his tally in the win.

Claiming that mantle seems fitting for Tomlinson who has carved out his career in the last line of defence, but it‘s a tag that sits uncomfortably with the 200-gamer.

“(Looking at the) individual accolades they’ve achieved I haven’t achieved anything to the extent those boys have,” he said.

“I’m just happy to have won the premierships.

“I’d give up any individual accolades for those.”

Despite his experience in the big dance, Tomlinson said the week certainly wasn’t any easier.

“I still had the guts churning all week,” he said.

“I was probably a bit more nervous than a lot of the others I can remember.”

Just a week earlier, earning a fifth flag was the last thing on Tomlinson’s mind, when he and partner, Kate, became parents to baby boy, Hugh.

“I spent the whole weekend at the hospital,” he said.

“I didn’t really think about the game until I was on the way to training on Tuesday.

“We were settled in at home by Wednesday with Kate and Hugh and it was good.”

The first-time dad said his new arrival fuelled his desire to make an impact on the grand final.

“It made me more determined to play well,” he said.

“I didn’t want anyone to think or have the opinion that the events of the week had gotten to me and [I’d] had a bad game.”

It was a concern that certainly didn’t materialise, with Tomlinson among the Panthers’ best in their win on the weekend, capping off a brilliant season.

More than a decade after winning his first senior flag, Tomlinson had one of the best years of his career, playing all but one game in the year, making the QAFL Team of the Year and representing the competition against the VAFA.

In that 2003 win, Tomlinson didn’t make it on the ground until the final quarter, but he was there for the final siren and the win whet his appetite to win more flags.

As one of the elder statesmen at the Panthers now, Tomlinson said it was special to see the next generation experience that as well.

“When we were back at the footy club, it was great just sitting back at the bar and seeing all the smiles on people’s faces,” he said.

“I was really happy for the young guys to win one and see what it’s all about.

His 2014 form will make his decision whether to try and turn his 2014 flag into a third back-to-back effort, that little bit more difficult, but it ‘s a choice Tomlinson isn’t focused on just yet.

“I’ll just enjoy this one.”