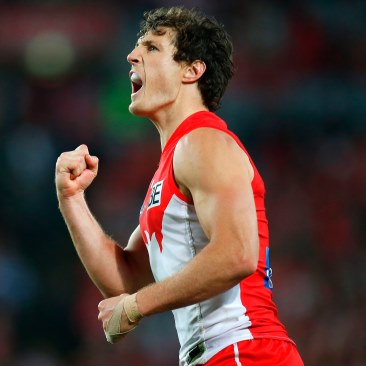 This Saturday, Queensland’s Kurt Tippett will be vying for his first senior premiership since the Southport Sharks 2006 flag.

Now a Sydney Swans key forward, Tippett is preparing for his first AFL Grand Final, in his second season at the club.

Tippett slotted perfectly into the Sharks side, with his ability to read the ball, his basketball-inspired leap and clean hands, all of which caught the eye of recruiters.

He was crowned the Sharks’ best and fairest in that premiership season and earned a spot in the U18 Queensland team, ultimately drafted at number 32 by the Adelaide Crows in the 2006 draft.

After six seasons at the Crows, Tippett was traded to the Sydney Swans, making his debut in Rd 12 last season.

A disrupted 2014 has seen Tippett play just 13 games, but he has proven to be a formidable prong of the Swans’ forward line, with 33 goals for the year, including four in last weekend’s preliminary final.

Tippett and fellow boom recruit, Lance Franklin, have been a dynamic force in attack this season.

Some describe Tippett as the Robin to Franklin’s Batman, however he has every reason to be confident that he can produce the goods on Saturday against arch rivals Hawthorn based on the season that he’s had.

Tippett has proven a handful for Hawthorn in the past, and his four goal haul for the Crows in the 2012 preliminary final thriller will surely be fresh in the Hawks’ mind on Saturday.

Hawthorn defenders Brian Lake, Josh Gibson or even Matthew Spangher will be charged with the task of nullifying Tippett in what looms as a pivotal battle.

Five great Queensland venues are partnering with the AFL to show the Grand Final, so head down to any of these on Saturday: