PNG into U14 Championships Grand Final 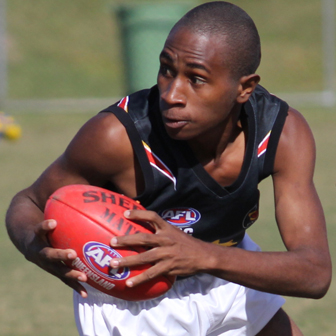 In a tense struggle at Sir Bruce Small Oval, Surfers Paradise on the Gold Coast, the AFLPNG Coca-Cola Under 14 Binatangs held on by one goal to defeat Brisbane West and progress to the grand final of the Under 14 Queensland Academy Championships.

The Binatangs bounced out of the blocks to lead by 4.0.24 to 0.1.1 at quarter time. Quick ball movement and superior foot speed and foot skills were used to run their Brisbane opponents off their legs.

Paniel Penias and Elton Palei dominated across the half back line and Shaddrick Iwi was strong in the ruck. Kepas Matrus was elusive in the midfield and Cobern Gumuna was presenting up forward.

The Binatangs dominance of the match continued in the second quarter with Peter Meli, Thomas Wakon, Samuel Kenjau and Stanley Giau all contributing.

PNG went into the half time break with a seemingly unassailable lead of 7.0.42 to 1.1.7

Half-time saw a big turnaround in the match, and for the second game in a row PNG switched off in the third quarter. Kepas Matrus and Nataniel Noke were out of the game with minor injuries and all of a sudden the run of the team had disappeared.

The fourth quarter saw the Brisbane West team get a huge run-on and PNG could do little to stem the tide. The full-back line of Thomas Wakon, Samuel Kenjau and Joe Mondo were gallant and discipled against opponents who were many inches taller. Jemasol Paira was giving everything in the mid-field.

Brisbane West poured on 4 goals and were only one goal astern with 90 seconds to play.

The Binatangs held on however to win an historic place in the Grand Final. They will play North Queensland at Broadbeach on Friday at 10am in a much anticipated match.