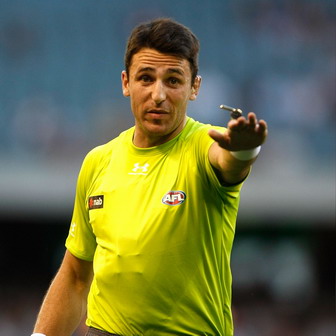 Most AFL Participants are aware of the pathway for players to progress from Junior football clubs through to Academy, State and National representative programs.  Players interested in pursuing an elite level career may then  go on to nominate for the draft or continue their football in a State level league such as the NEAFL.

Similarly umpires follow the same development pathway although generally their progression is a couple of years behind players.  This is usually due to the high degree of responsibility placed on an umpire to manage the game.  Also through junior football umpires are most likely to umpire players in a younger age bracket than themselves.  Umpires too, have goals of reaching the AFL and performing at an elite level.  They participate in representative football carnivals and talent squads as part of the pathway to AFL.

Apart from these two pathways there is a third pathway that merges across both.  That is the player to umpire pathway.  In this circumstance players choose to pursue umpiring.  Some are driven by a desire to stay involved in the game and service community football.  Others are driven by a desire to reach AFL through this alternate pathway and enter a fast track program run by AFLQ.

Fast track umpires participate in training sessions for both NEAFL and Community umpires to maximise their learning opportunities.  They undergo a streamlined accreditation process that will see them achieve Level One and Two within one season of football.   They are provided with a dedicated umpiring mentor from either the NEAFL or Senior community group to assist them on match days and provide feedback on a very regular basis.

Ex Essendon player Jordan Bannister is currently umpiring AFL football and is an excellent example of the player to umpire pathway.

AFL Queensland also has some former players amongst our current umpiring ranks. Most of these umpires have pursued the community football path however two have made it NEAFL and SEQAFL cup level.

AFL Queensland also has a former SEQAFL Division 1 player that has entered our program this season.    Whilst in the initial stages of the program, he has already shown fantastic commitment, initiative and footy feel and we expect he will be in line for an invitation to trial for the NEAFL panel of umpires by 2014.