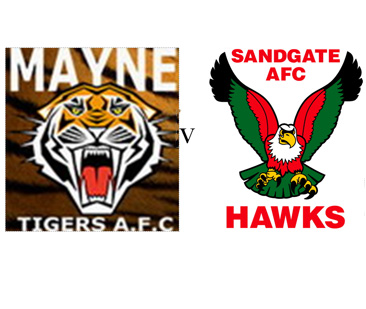 It’s the Top half vs the Bottom half in round 4 of the SEQAFL Pineapple Hotel Div 1 Cup.

No.1 – Noosa are at home to No. 8 – Surfers Paradise, No. 2 – Wilston Grange travel to No. 11 – Springwood, No. 3 Palm Beach Currumbin host No.9 – Maroochydore, No. 4 – Western Magpies travel down the M1 on Sunday to tackle No.7 – Coolangatta which leaves the Match of the round between Mayne, sitting at No.5 and Sandgate one rung below them at No.6.

Mayne are the early season improvers while the Hawks are struggling for consistent early form.

“There has been a long standing rivalry between our two Clubs and no matter where they are on the ladder they have always given us a run for our money,” said Hawks Coach Ben Long.  Asked about the loss of talented players during the off season he said, “We are proud of the 22 we put on the park each week and are more than happy to start as underdogs”.

Mayne Coach Mitch Ferguson talked about the past history between the two Club, “We have not beaten them in 61/2 years, 13 times in a row we’ve come away losers so we are really looking forward to this clash.” he said.

The Tigers approach to the game has changed, in the 3 games they have played this season their attack on the football has been ferocious, “preseason our aim was to get as fit as we could and contested ball has been a major focus at all training sessions, we have also added a bit of height to our forward line,”said Ferguson.

Both sides have made changes The Hawks have 2 first games in Jarred Hills and Pat Devers both form Aspley and U18 player Sam Summers comes up to the Seniors. Mayne have Caleb Brown returning from injury along with Scott Maxwell, Jake Magill and Blake Faulkner.

This game should live up to its Match of the Round status.

The game between Springwood and Wilston Grange looks, on paper, a bit like David & Goliath.

Springwood has had a terrible start to the season having a bye in round 2 and then their game against Surfers Paradise last week was washed out. Pumas Coach Paul Opbroek said,” it’s been a disappointing start to what is a very tough early season draw, but we’ll keep chipping away and improve with each game we play. We are young and inexperienced but we are looking forward to the challenge.”

The Gorillas early season form has been excellent and even though they lost a number of good players from last season they have recruited very well.

Coach David Martin was very pleased with the way they fought out the game against the Magpies last round, “we are still putting things in place, working on defensive patterns and how to move the ball quicker into our forward line. Last week was the best we have combined so far but there is still plenty of room for improvement.” he said.

SURFERS Paradise need to be at their very best to break their Pineapple Hotel Cup season duck today when they tackle the toughest road trip in the competition.

The Demons are on the road to Noosa, premiers of the past two years, at the Weyba Road slaughterhouse which coach Beau Zorko labeled a “fortress”.

This exercise comes on the back of a disappointing start for Surfers, who lost narrowly to Mayne and Palm Beach-Currumbin, then had last weekend’s match against Springwood washed out.

“We’re certainly not in a great situation at the moment, but we have an opportunity to go there and put four points on the board,” Zorko said.

“Weyba Road is very much a fortress for them, so we must have the right attitude and discipline and execute what we need to execute.”

Smart is fresh from a stellar season in the Darwin summer league and Bourke, from Grovedale in the Geelong Football League, is an association representative.

“And there could be another two coming next week,” Cresswell said.

Coolangatta complete the local campaign when they play Western Magpies at Len Peak Oval on Sunday.

The Blues report that numbers should be right this weekend after the club forfeited reserves last round.

They get back Justin White and John Vogae back from suspension to bolster the top grade.

Burleigh Bombers are idle this weekend with the Round 4 bye.