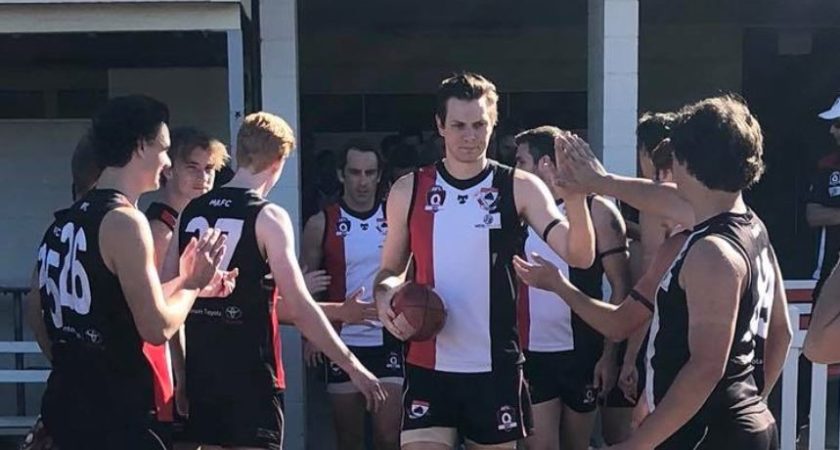 Morningside ruckman Peter Mollison has rocketed into the top ten of the Syd Guildford Trophy following an influential performance in the Panthers’ shock win over Palm Beach Currumbin in Round 13.

Mollison shone in what is perhaps the biggest upset of the 2018 QAFL to date, polling eight votes in the Morningside win.

Having been named the starting ruckman in both the 2016 and 2017 QAFL Team of the Year, Mollison has gone from strength the strength in 2018.

He now sits in sixth position in the overall Syd Guildford leaderboard; higher than any other ruckman in the competition.

Evergreen wingman Evan Panozza became the only player across Round 13 to poll the perfect ten votes following his best on ground performance in the Cats’ win over Mt Gravatt.

After winning the Broadbeach Best and Fairest in 2017, Panozza has worked his way into the season nicely and sits just outside the Syd Guildford’s top ten.

The remaining votes from the Cats’ clash with the Vultures were shared between the two clubs.

Haberfield is perhaps now in the box seat to win the award after current leader Campbell Wearne suffered a broken collar bone in the Panthers’ win over Palm Beach Currumbin.

The nine-vote performance draws Haberfield within five votes of Wearne as one of five Demons to poll votes this round.

Harrison Fraser (seven), Matt Doran (four), Connor Manning (two) and Joel Foster (one) were the other Surfers Paradise players to feature while Wayde Mills (six) and Dyson Budarick (one) were the only Tigers to do the same.

Votes were shared in the QAFL’s north-side derby as just 14 points separated Wilston Grange and Sandgate on Saturday afternoon.

See the full Round 13 votes below: