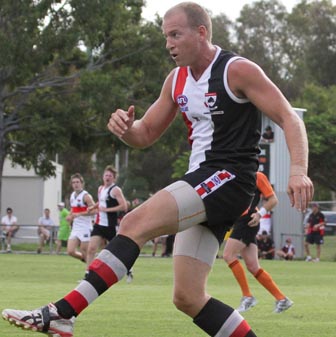 The bye has come at a good time for Morningside as they look to get their strongest side up and running for the QAFL finals series.

Morningside have welcomed the bye for the national country championships despite building some momentum in their premiership defence with a win over Southport last weekend.

Having been hammered by injury since Round 3, the Panthers have managed to hang in the top three all season and can prepare for a serious assault on September.

“For us it has,” Panthers coach John Blair said of the bye coming at a good time. “We had the NT up there and a tough game here (against Southport).

“We have had a heavy representation in State football…there’s a lot of blokes you don’t think it will take a toll on, but does eventually.

“To get through (with a win over Southport) and have a breather and hopefully come up well against Mt Gravatt, who did looked good last weekend, will be good.”

The Panthers travel to Dittmer Park for a fascinating showdown with the Vultures on Saturday week.

One of those players who will enjoy the weekend off more the most will be big man Jacob Gough, who has nursed a painful shoulder injury for the last fortnight.

He nonetheless threw himself around in the win over Southport, setting up a momentum change with his clinical rockwork in the second quarter and taking some saving marks across half-back in the last.

“It’s got to be (courageous carrying the shoulder) because you have to jump at the centre bounces and the upper body takes a lot of pressure,” Blair said.

“The two weeks will no doubt do him good. He’s 30 years of age and needs R & R. There’s not another player in the competition who has the influence that he does that plays as much game time.

“The break will do him wonders, he will come back nice and fresh.”

As for the last month of the season, Blair and his charges will be taking it one game at a time.

“That’s all we can do. We can only influence things by winning,” he said.