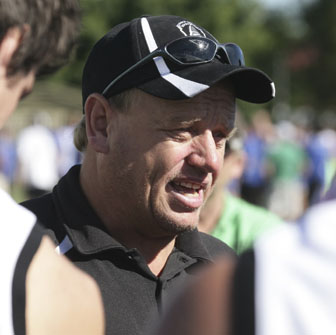 Southport’s troops are enjoying a week off as they look to re-load and bounce back from successive defeats.

Southport go into the bye weekend on the back of successive losses but the Sharks remain well poised for a premiership assault.

The losses were to the two sides immediately around them, Labrador and Morningside, and on both occasions leading forwards Cleve Hughes and Cameron Maclaren were lame or missing.

Coach Craig Crowley and his players were looking forward to this week’s break, where the majority of the squad are on light duties.

“I’m going away,” Crowley laughed when asked of his plans for the week.

His top players have all carried a heavy load through the opening half of the season and he admitted the week off would not hurt the club.

“They probably do need a break. A lot of them have played State footy and a lot are pretty sore at the moment,” he said.

“The blokes who are sore are the blokes who have been holding us up for most of the year. They might come back refreshed and rejuvenated and give us even more.”

Crowley is not necessarily in agreeance with the philosophy that you learn more from a loss than a win, which the Sharks have experience on just three occasions from 14 matches in 2010.

“You learn regardless, win, lose or draw,” he said.

Morningside’s 13-point win at Esplen Oval last weekend nonetheless has given the Sharks plenty to work with.

“You can circumnavigate it as much as you like but at the end of the day we have got to be more disciplined and harder at the ball,” Crowley said. “Our fitness is alright because we nearly ran them down at the end.

“We’ll dissect it (the game) and get the best out of it.

“The guys are talking positive and not losing any sleep over it.”