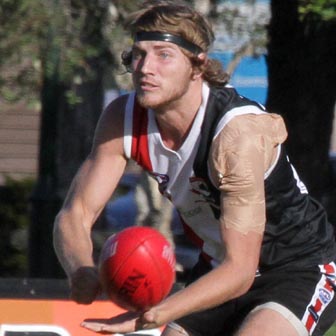 Reigning premiers Morningside have minimized their losses for the step-up into the North Eastern Football League, attracting two quality Division 2 rep players to cover for the departure of several  members of last year’s grand final side.

While champion ruckman Jacob Gough retired after claiming his fourth premiership medallion last September, quality young midfielder Alastair Nash is having a season in regional Victoria and the slippery Mark Kimball has returned to Eastlake.

The biggest challenge facing the turbo-charged Panthers will be in the ruck, with teenage back-up to Gough, Tom Hickey, having been drafted by the Gold Coast Suns.

They will fill the gap with former Redland and State Under 18 player Matt Sturgeon, who has been enticed across from Victoria Point.

The gifted athlete will look to follow in the footsteps of Hickey, who was a huge influence over the second half of 2010.

Mayne key defender Caleb Brown, a standout in the Pineapple Hotel Cup and the Australian Country Championships for a number of seasons, is also training at Esplen Oval alongside Tigers teammate Luke Ferguson.

The duo are expected to make a seamless transition to the next level.

Morningside have also gained the services of crack midfielder Jackson Allen from the Western Magpies.

Allen will a key member of the Australia Post Queensland Under 18 program and is a certainty to be at an AFL club next season.

Much like Hickey was in 2010, he will be most benefit in the last half of the season once his representative commitments are finished.

Kimball, whose second half bursts flattened the opposition on a number of occasions over the past seasons, has returned to Canberra for family reasons but has not ruled out a return to the Panthers in the future.