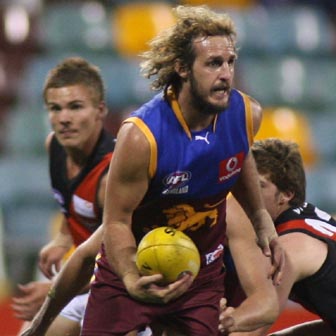 Redland have won the race for the signature of highly-rated midfielder Travis Johnstone and in doing so landed their third prized recruit of the summer.

The Bombers signed the 30-year-old former AFL star last night, beating at least two other rival clubs to the punch.

Having already attracted ex-Lion and Magpie Anthony Corrie and former St Kilda midfielder Brad Howard to Victoria Point, the securing of Johnstone ahead of some stiff competition will give the Bombers a power-packed on ball brigade in the inaugural season of the North East Australian Football League.

While his form was inconsistent in the past two seasons with the Lions, he collected possessions at will when representing the Lions Reserves in the QAFL.

“There is plenty of buzz around the club at the moment.”

Millar described Corrie as having been ‘fantastic’ since he joined the playing group, while Howard has brought his renowned professionalism back to the club from which he was drafted by the Saints.

With two other ex-Lions players in Scott Clouston and Daniel Dzufer having performed well in their first season at Redland last year and 2009 nab QAFL Rising Star James Charlesworth in the best shape of his career, the Bombers will be strong contenders for a finals berth in 2011.