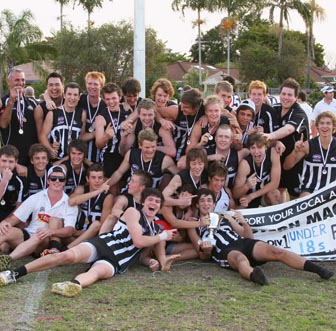 The Western Magpies are making a solid recovery from the floodwaters that devastated the club three weeks ago, with the senior squad set to return to Sherwood for training next week.

A core of 45 to 50 players have been training at Moorooka since the flood inundated the ground and clubhouse at their home on January 10.

While there is still plenty to be done, the focus is very much on football with the Magpies’ return to the Pineapple Hotel Cup following two winters in the QAFL.

The club is on the lookout for 2-3 assistant coaches to work with head coach Peter McLennan, while a reserves coach is also required.

While a number of players have moved to QAFL clubs, there is still plenty of depth at Sherwood and McLennan is looking for plenty of wins from a club that won two premierships in three seasons in Division 2 before being promoted to the State League.

Some demountable buildings have been set up at Sherwood to house gym equipment, the ground has been cleared for the return of training and some juniors ran on the oval this week, most of the lighting has been fixed and the club bar and canteen should open next week.

McDonald said the Magpies were extremely grateful to Moorooka for providing the club with a training venue since the flood.

He also praised players and officials from both Moorooka and Aspley, who helped with the clean-up around the club.

Assistance has come from as far as Victoria, with the Blackwood Football Club raising about $1500 for the Magpies through a Twenty20 cricket match.

Anyone interested in an assistant coach role or taking charge of the reserves team should forward their interest to macka19691@hotmail.com or call McDonald on 0407 718 303.