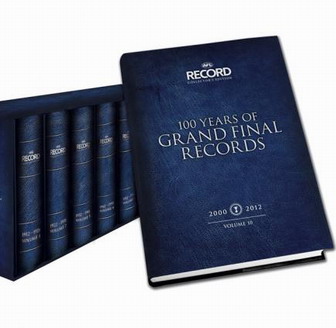 With finals upon us, many die-hard footy fans must already be wondering what they are going to do with their Saturdays when the off season hits.

While many will don the whites and head across to cricket there will be people out there with a large football-shaped hole in their lives.

There is some good news however for when Foxtel’s footy classics just won’t cut it, three brand new books from Slattery Media.

Each of the Grand Finals are recounted in great detail from Melbourne’s historic three-in-a-row win (1939-41) through to North Melbourne’s fight through five consecutive finals to claim the 1977 flag.

His most notable roles include his work on the Sun newspaper, World of Sport, The Footy Show and The Sunday Footy Show.

Over more than half a century Lou Richards has made an immense contribution to the game of Australian Rules Football and his story is fully documented in Lou: My Wonderful Life.

100 Years of Grand Final Records April 27, 2012 marks the 100th year of publication of the AFL Record, the official match-day program of the AFL. To commemorate this milestone, Slattery Media has released a boxed set comprising 11 hardback, full-colour volumes of every Grand Final every published.

Limited to only 1,000 copies is the ultimate collector’s edition for any footy fan. From Essendon’s Grand Final triumph in 1912, through to 2011’s 244-page souvenir edition there is something here to excite any AFL lover.

Established in 1996, the Australian Football Hall of Fame celebrates the achievements of almost 250 of the game’s greatest names.

Legends of the Australian Football Hall of Fame charts the careers of the select group of inductees who have been elevated to Legend status—an honour bestowed in recognition of their significant contribution to the great game of Australian Rules Football.

Legends of the Australian Football Hall of Fame provides an inspiring look at the skills, achievements and memorable moments of the various Legends, including: Barrie Robran who dominated football in South Australia during the late 1960s and early 1970s; Gordon Coventry, one of the most prolific goalkickers in league history; Jack Dyer, who played 312 games for Richmond; and Ron Barassi, who won a total of 10 premierships as a player and coach.

In addition, Legends of the Australian Football Hall of Fame includes Barry Cable, who was a triple Sandover Medallist in the WAFL and who starred in the VFL with North Melbourne, playing in the club’s first two premierships in 1975 and 1977.

Through captivating essays and rich imagery, Legends of the Australian Football Hall of Fame examines the legacies of the footballers who, since football’s inception in 1858, have made a lasting impression on the game.

All titles can be purchased directly from Slattery by clicking here.