Fierce start to U18 Shield finals 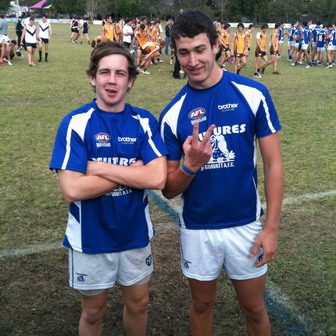 Finals fever hit the SEQAFL Divsion One Under 18 competition on the weekend as they entered their first finals round.

Semi-final one saw the Aspley Hornets and the Southport Sharks put everything on the line in their elimination final.

Southport used the breeze early in the first quarter to establish a solid lead.

Going into the second 15 points down meant Aspley had to fight hard to halftime. Southport was able to hang on by the skin of their teeth in the second going into the major break up by 4 points.

The breeze was really backing Southport again in the premiership quarter, allowing them to open up a slight lead and go into the final term ahead by 10 points.

With the Breeze in their favour in the last, Aspley again fought hard, hitting the front the first time all day.

The league’s leading goal kickers and Best & Fairest awards were announced in the break between semi-final one and semi-final two.

The Best & Fairest votes had been pooled throughout the week, with the winner coming down to the final round of votes.

Mt Gravatt’s Jordan Plumridge was eventually announced at the Under 18 Division 1 shield B & F winner.

Both players will be officially presented with their awards at the Grogan Medal Award Night later this month.

Semi-final two for the day saw Minor Premiers Morningside battle it out with Mt Gravatt in order to book a Grand Final berth for two weeks time.

Mt Gravatt jumped out of the blocks early and posted a handy 14 point lead at the end of the first quarter.

The vultures expanded their lead to the half-time break with inaccuracy in front of the goals keeping Morningside in touch.

Morningside came out firing in the third quarter limiting Mt Gravatt to just 1 goal while piling on four themselves.

In some of the most thrilling footy this season, Morningside clawed their way back into the game.

Eight additional scoring opportunities couldn’t save Mt Gravatt in the end with Morningside taking the game by a heart-breaking 2 points.

Mt Gravatt and Aspley will now battle it out for the chance to take on the Panthers in the Grand Final.

The Preliminary final kicks off this Saturday at 10:30am at Yeronga AFC.

Kids LEAP with Lions in 2012
New Books For Footy Fans