More of the Kangaroo: 1985 – The Sharks and Tigers play one of the great QAFL Grand Finals 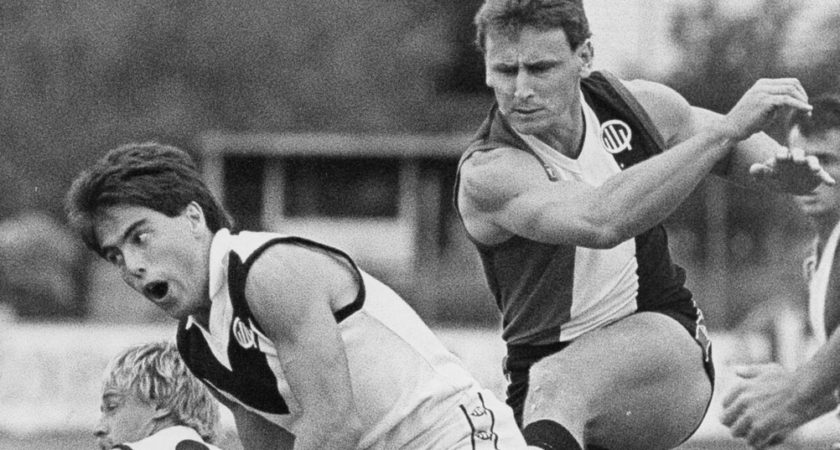 The following is an excerpt from More of the Kangaroo: 150 Years of Australian Football in Queensland.

The inclusion of a Queensland-based team in a national competition came one step closer to fruition when both the VFL and NFL released proposals for such a competition nearing the end of the year. In his annual report, General Manager Ken Murphy wrote that:

Australian Football in Queensland is on the threshold of a major impetus according to all involved with our game throughout Australia as it is generally recognised that we are the last frontier for a claim that the game is truly National.

Most believe that the involvement of Queensland in any National component is essential and certainly our performances of recent by development of players for more senior competitions and our Representative performances at senior and junior level have added strength to our cause.

Soberingly, Murphy explained that the ongoing need to develop a headquarters ground had the potential to be a significant obstacle and that resolution of the problem was of a high priority for the League.

A contract to broadcast live QAFL games over a three-year period was successfully negotiated with TVO (Channel O). Games were presented by Barry Grinter, Ken Guy, Ken Smith and Arthur Higgins at different times and coverage began on 28th July with the Mayne-Coorparoo Round 15 game at Keith Beavis Oval. One match in each of the final four rounds, the premiership finals and the Grand Final of the Foster’s Queensland Championships were broadcast in 1985.

W D & H O Wills continued as major sponsors of the League and again the premiership was known as the Escort Cup. Each team played each other twice, a total of eighteen games in the minor round. Matches were played at the suburban grounds on Sundays and Monday public holidays, with all finals held at Keith Beavis Oval. With a view to promotion, one game in Round 7 was played at Caloundra between Sherwood and Mayne. 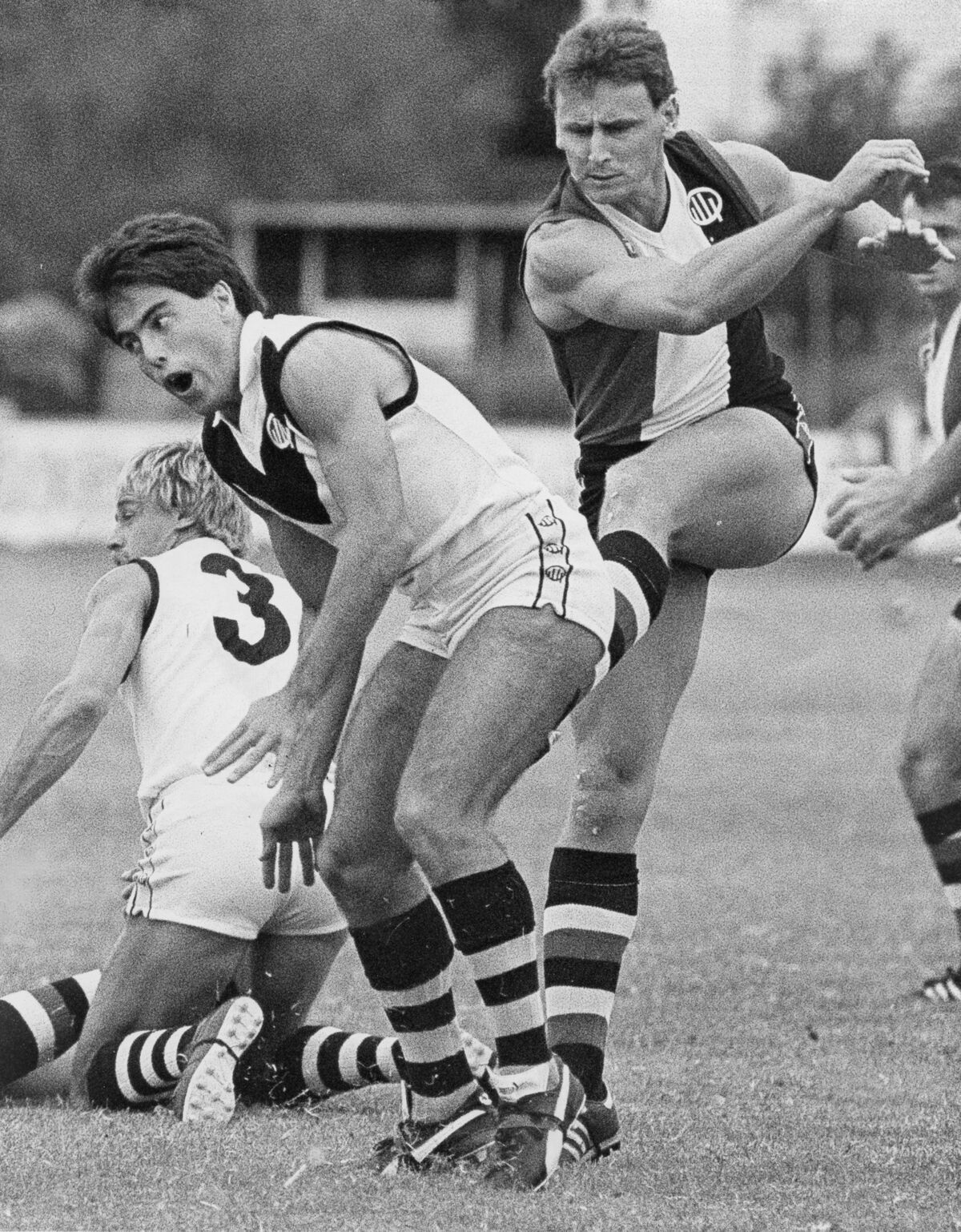 After Southport thrashed Sherwood by 116 points in the opening round at Yeronga, the Sharks held top spot on the ladder all season. Having won their first seven games, Southport were upset by two points by Kedron at Owen Park before losing to Coorparoo a week later when depleted by injury. These were the Sharks’ only losses in the minor round; nine straight wins there after saw them win their first QAFL minor premiership, two wins and a huge percentage difference clear of the field.

Southport’s ascension to the premiership in their first year in the QAFL two years earlier had been followed with a Preliminary Final berth in 1984. After the way the Sharks dominated the competition in 1985, there was little argument that Southport had arrived as the new powerhouse of the competition. Still, the flag had yet to be won.

Coorparoo, who struggled to find its premiership form of the previous season, confirmed its place in the finals by beating Zillmere by 31 points in the second-last round. The Roos hadn’t made it into the five until Round 10 when a long goal from Brett Jones on the siren gave them a thrilling one-point victory over Morningside at Jack Esplen Oval.

The Roos’ cause was not helped by two separate four-match suspensions for striking handed out to playing coach Laurie Pendrick during the season. Pendrick was also coach of the state team at the time.

Mayne and Zillmere were the big improvers from the previous season. Having missed the finals in 1984, Mayne finished second, a win ahead of Morningside. A two-point win by the Tigers over the Panthers at Jack Esplen Oval in Round 14 was pivotal. Zillmere climbed from ninth a year earlier to fourth.

Kedron missed out on a finals berth on percentage only, finishing a win ahead of Wests. Grange won five games, the most victories they’d had in a season in five years. Sherwood were ninth, a win ahead of Sandgate who claimed their first wooden spoon having finished second after the minor round the year before. The season saw the end of Alex Jesaulenko’s tenure as coach of the Hawks.

The year saw Tom McArthur etch his name in the record books when he umpired his 500th senior game.

At the half-way mark of the second stanza of the Elimination Final Coorparoo led Windsor- Zillmere by 51 points. The Eagles, spurred on by their loyal and vocal supporters, piled on fifteen of the next eighteen goals to defeat the hot-pot Roos by a goal. Peter Blucher summarised the Eagles’ performance in The Courier-Mail:

Zillmere rover Jim Payne, noted more for his pace and brilliance than his toughness, answered his critics with a blistering display, capped by five goals. Greg Frank was outstanding at fullback, Craig Brittain was in almost every forward thrust, and David Pie, hobbling on a bad knee one moment, but sprinting, marking, kicking goals the next, made an invaluable contribution with seven goals and three “assists”.

In the Qualifying Final Mayne added nine goals in the third quarter to help the gold-and-blacks to a thrilling two-point win over Morningside. John Blair missed a shot at goal with ninety seconds remaining, pulling his kick to the right. His coaching adversary Mick Nolan continued his meteoric rise as a cult hero in Queensland with a best-on-ground display. Tony Beckett was also a standout for the Tigers.

Thirty-year-old Robert ‘Moey’ Keeble, a former Adelaide Amateurs player, was the star for Morningside in their 63-point shellacking of Windsor-Zillmere in the First Semi-Final. In the Second Semi-Final Peter Guy was exceptional in the Sharks 27-point win over Mayne.

Morningside’s horror final’s record continued when they were never in the hunt against Mayne in the Preliminary Final, going down by 79 points. Ex-Tasmanian Mayne full forward Glenn Goss had a day he and the 3,000 spectators at Beavis Oval will never forget. He marked everything that came his way, and the ball was coming in regularly to the Tigers forward line, giving the athletic forward many opportunities. Goss’s accuracy (17.4) was also superb, allowing him to notch an incredible seventeen of team’s 25 majors.

The awesome performance eclipsed the all-states finals record of the great Peter Hudson, who kicked fifteen goals for Glenorchy in Hobart in 1981.

Only 6,543 spectators witnessed the 1985 Grand Final, with many fans choosing to watch the live telecast. Those who trekked to Beavis Oval were treated to what was possibly the greatest season finale since the regeneration of Australian football in Queensland in 1903. Mayne boasted a one-point victory over Wests in 1951, and South Brisbane (1911), Wynnum (1920), Brisbane (1922) and Sandgate (1957) all recorded two-point Grand Final victories. The margin in 1985 was three points. It was a classic.

Mayne, minus injured stars Phil Harper and Tony Beckett, led by 23 points at three-quarter-time in a low-scoring affair. But the Sharks kicked the first four final-quarter goals to edge in front. Jack Farrer, now cleared from Coorparoo and playing in the fullback position for the Tigers, was swung forward and kicked a goal to put Mayne in front with ten minutes remaining on the clock. No-one left the ground as the Tigers hung on to the lead for a tense nine minutes. Loyal fans of both clubs were screaming themselves hoarse.

Norm Dare threw caution to the wind demanding several members of his backline move forward with ninety seconds remaining. Brett Thompson (father of Gold Coast Suns Rory Thompson) had kicked six goals and was one of the Sharks’ leading lights. He gathered the ball near the centre and with a pinpoint pass kicked towards Glen Middlemiss who slid along the ground on his knees to take a chest mark forty metres out on a 45-degree angle. Middlemiss kicked truly and with only seconds remaining the Sharks were premiers by three points.

Ace photographer Ron Lockens captured the action. Only minutes before, sensing the moment, he had moved to the Southport end of the ground. Lockens said after the match: “I thought if something special was going to happen, Middy was the player who would provide it”.

It would be many years before the code would see another QAFL Grand Final as gripping and as tense as the 1985 decider. It would be the last Grand Final for the mighty Mayne Tigers, so integral to the development of the code for the previous sixty years. They’d had their share of controversy and more of that was on the way.