More of the Kangaroo: 150 Years of Australian Football in Queensland 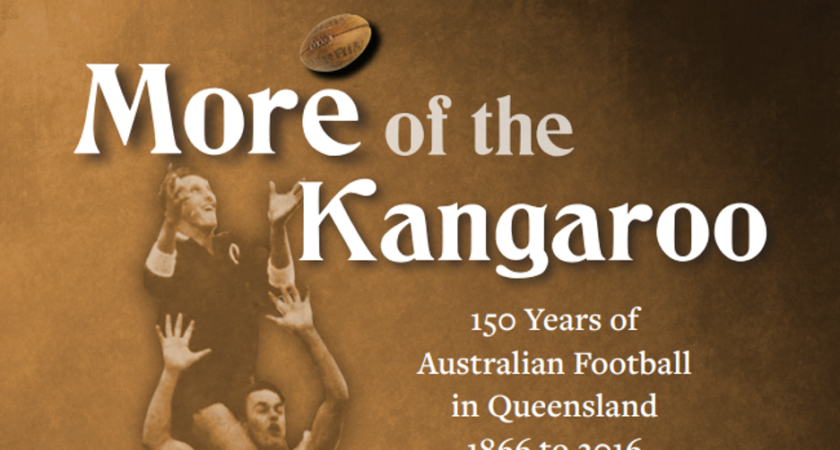 Despite commonly held misconceptions, Australian rules football has been played in Queensland for a long time.

Over 150 years ago, the first Brisbane Football Club was formed and since then, Australian rules football has been played in the sunshine state albeit for a brief pause in the last decade of the 19th century.

After over a decade of research, Greg Parker and Murray Bird will release their book More of the Kangaroo on December 11, 2018.

The book is a local history, detailing the heroics, the controversies, the premierships along with the successes and failures of football from Cairns to Coolangatta.

Local heroes and villains, champions teams from Townsville to Toowong, umpires, interstate matches, women’s football and much more and chronicled, described, and brought to life.

More of the Kangaroo will be launched on December 11 2018 at the Coorparoo Football Club, Birubi Street, Coorparoo at 5pm for a 6pm start.

For those wishing to attend the book launch, please contact Murray Bird at murray@interchanger.com.au.

If you love the game of Australian football, if you have an interest in the history of Queensland, or if you just like a well-researched and well-written book, then pre-purchase your copy of More of the Kangaroo.

You can purchase the book HERE.

The AFL has released the fixture for the 2022 NAB League Girls talent pathway competition, which starts on Saturday 22 January. The future stars of women’s... [more]

The Toyota Good For Footy Gear Grant program is back for the third-season running, with 100 female football teams around the country to benefit from funding to... [more]

The Gold Coast SUNS will meet the Brisbane Lions in the first official NAB AFLW Practise Match ahead of the start of season 2022.  The game, which is open... [more]