Lions v Magpies PHC Match of the Round 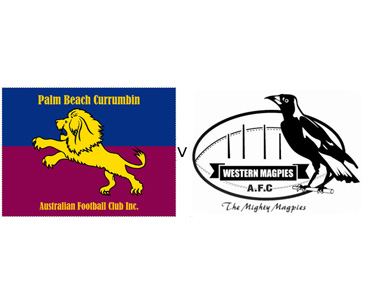 THE decision by Palm Beach-Currumbin’s match committee to replace two talls with two smalls suggests the Lions have concerns over the running power of today’s opponents Western Magpies.

For the big clash at Salk Oval, the Lions brought in Tyler Cornish and Brent Rynehart to replace ruckman Lindsay Bredenoord and Aaron Lohrey.

PBC coach Daryn Cresswell has watched the Magpies in their past two matches  a loss to Wilston-Grange and a massacre of Coolangatta  and he has been clearly impressed by the way the western Brisbane side can move the ball.

But there is a train of thought in the competition that the Magpies can be brought undone by a side that starves them of the ball  and that will be the intention of the Lions, to see if the Magpies can defend as well as attack.

“Sure, we’ve made changes to get more run,” Cresswell admitted.

Magpies coach Peter McClennan is well aware questions are being asked about the non-attacking side of his team, but is positive his side is on the right track.

Yet he conceded he knows little about the weekend opposition.

And he put the loss to Wilston-Grange to being “just a wet, old day and we played poor football”.

“Palm Beach are always hard to beat at home and they’re always bringing in new people,” he said.

“Quite frankly, we don’t really know what to expect.”

The Magpies have to adjust from what was basically a training drill in their rampage over Coolangatta the previous weekend to what will be a full-on tough clash against a quality side.

They have only two changes, bringing in utility Scott Clark and tall wingman Bill Moorhead after he played for the Brisbane Lions seconds.

Surfers Paradise coach Beau Zorko says he has hardly had the need to keep the lid on things following the Demons’ away win against premiers Noosa last weekend.

“Why should there be because we haven’t done anything yet,” he said.

Surfers made two changes for their match against Maroochydore at Sir Bruce Small Park today.

Playmaking centreman Simon Fenton and on-baller Mitch Ryan are both out carrying soreness and into the side are experienced defender Mark Thompson and 17-year-old Jack Bristow.

Coming off successive hidings from Noosa and Western Magpies, McKay was asked if there is any light at the end of a long, dark tunnel.

“Our leadership group has been very pro-active and there is a much better feel around the club,” McKay said.

“When you have a couple of beating like we have had there are two ways to go.

“We can group together and get stronger or we can disintegrate – and we won’t be doing the latter.”

The Blues have brought in David Meli from Redland, Tyler Green on permit from Broadbeach, elevated Josh McCleary and Nathan Conlan after big games in the reserves and regain Nathan Millard from injury.

At the best of times the Tigers are hard to beat, yet this time they will be especially fired up following their surprise loss to Surfers Paradise last weekend.

This comes on top of news that arguably Burleigh’s best performer, captain and midfielder Marcus Powell, will be playing his last game after accepting a new job on Western Australia.

“We just hope he can have a positive finish and we put in a competitive effort,” Doubleday said.

In the only game being played in Brisbane this round Mayne Tigers take on an injury riddled Springwood at Everton,

The Tigers have shown a big improvement this season and will be looking to build on their percentage against the struggling Pumas, Mayne coach Mitch Ferguson will be hoping for his side to play the full 100 minutes after they surrendered a ¾ time lead in 2 games they could have won.

The Pumas depth has been tested so far this season and with a bye and a washed out game in the first 4 rounds are desperately in need of a consistent performance.