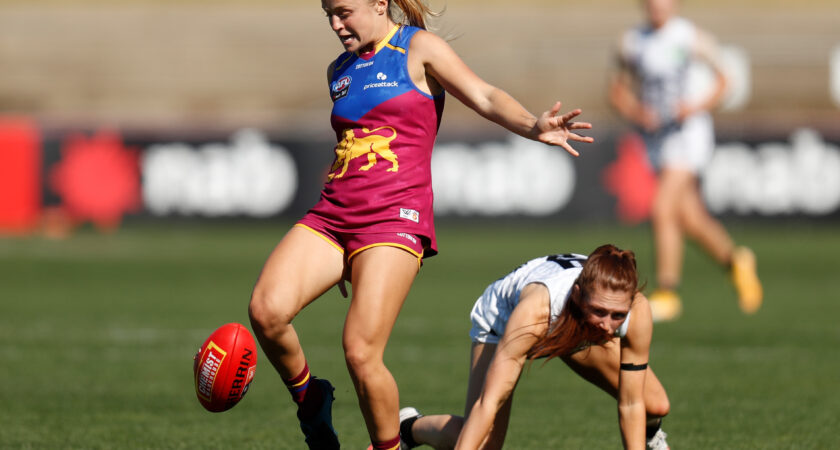 The fixture for Week Two of the 2021 NAB AFL Women’s Finals Series has been revealed, with Preliminary Finals to be hosted at Adelaide Oval and The Gabba next Saturday, April 10.

Each winning a Qualifying Final this afternoon, Melbourne and Collingwood will progress to Week Two of the 2021 NAB AFL Women’s Finals Series.

After earning a break in Week One of the 2021 NAB AFL Women’s Finals Series, Minor Premier the Adelaide Crows will host Melbourne in a Preliminary Final on Saturday, April 10 at 1:40pm local time (2:10 AEST) at Adelaide Oval.

Also coming off a one-week break, the Brisbane Lions will host Collingwood at The Gabba at 4:10pm AEST on Saturday April 10.

For the first time in the competition’s five-year history, 14 teams participated in a nine-round home-and-away season, before the top-six teams entered a three-week Finals Series.

The winner of each Preliminary Final in Week Two of the Finals Series will progress to the 2021 NAB AFL Women’s Grand Final to be held on the weekend of April 17 / 18.

“After an exciting and unpredictable first week of the 2021 NAB AFL Women’s Finals Series, we are really looking forward to witnessing how the Preliminary Finals unfold,” Ms Livingstone said.

“All four teams heading into the preliminary finals have enjoyed stellar seasons throughout 2021 and the race for the Premiership remains wide open.

“Earning the right to host a Preliminary Final, both the Adelaide Crows and Brisbane Lions will welcome members and supporters to Adelaide Oval and The Gabba respectively.

“With tickets remaining the same price again for Week Two of the Finals Series, we look forward to seeing all supporters at the footy next weekend to witness two teams confirm their spot in the 2021 NAB AFL Women’s Grand Final.”

Noosa - 2021 QAFL season look ahead
Get voting: Lions and SUNS players named in the 22under22 squad

Will Martyn to make his AFL debut for Richmond

Submitted by Peter Blucher. Thirty-three years after he was crowned the king of Queensland football Andrew Martyn is set to enjoy an even greater thrill when... [more]

By AFL Media. It’s that time of year again… tell the kids to lace up their boots and get a drink bottle ready, the 2021 NAB AFL Auskick season has... [more]

Meet Adam from Kedron Lions AFC NAB AFL Auskick Program. He is a first year Auskick Coordinator and is doing an amazing job on the northside ensuring her... [more]

Get voting: Lions and SUNS players named in the 22under22 squad

AFL Players’ Association’s AFLW 22Under22 squad has been announced with a host of Brisbane Lions and Gold Coast SUNS players on the list. To be eligible... [more]