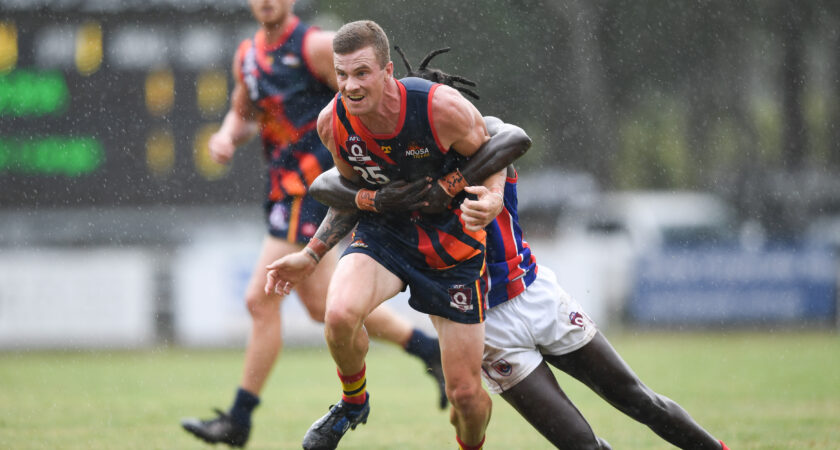 Noosa will be eager to make their presence felt when they host Wilston Grange at Rococo Oval in today’s Easter Saturday clash, which will launch the 2021 Queensland Australian Football League (QAFL) competition.

After appearing in the last four Division 1 Hart Sport Cup Grand Finals and being crowned back to back premiers in 2019 and 2020, Noosa have positioned themselves extremely well to make a seamless transition into the state’s premier men’s competition.

Noosa Senior Coach, Adam Bovalino, a former premiership captain with the Tigers, said going up to the premier competition was a big step but he has belief in the group.

“Our expectations as a team doesn’t change just because we go to the QAFL, we still want to win enough games to give a chance to play finals footy,” he said.

“We began our pre-season training in December with a big focus on body movement and match simulations.

“The entire senior contingent came back after the break in terrific condition with club leaders Aaron Laskey, Ryley Buntain and Taylor Stack all leading from the front.”

The Tigers claws were out during a recent practice match against reigning premiers Morningside Panthers. Noosa led by five goals at half time, however tired towards the end of the fourth quarter and couldn’t come away with the win.

“It was a great test for our side, we took a lot of confidence away from that match,” said Bovalino.

“We were in it for most of the game, Morningside played better footy in the second half and stared to pick us apart at the end.

“If we can bring the pressure and intensity we had in the first half against Morningside, it will go a long way to us winning games.”

“We have been fortunate enough to retain most of our premiership team, which is exciting,” said Bovalino.

“We have had Jai Fitzpatrick and Will O’Dwyer join the Aspley VFL list, but we are hopeful they will be available to play in Round 1.”

Noosa have a bye in round two.