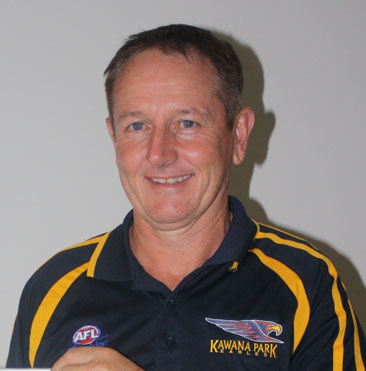 The time of the year is upon us when AFL Clubs across the Sunshine Coast hold their Annual General Meetings and the gallant leaders for season 2013 are voted in.

As executive committees are dissolved as per constitutional requirements the incoming committees will see new people coming on board and the ‘old faithfuls’ keeping the wheels turning.

Kawana Park Eagles AGM was one of a momentous occasion this year.

For the past seven AFL seasons, Paul Meehan has fearlessly led the Eagles as President but has handed over the baton for season 2013.

In departing Paul reflected on his time as President, from the initial apprehension – to building a club to be that of a powerhouse on the Sunshine Coast.

“This time in October 2005 I was appointed President of the then Chancellor Park Eagles with 60 participants, five hard working committee members and we ran the club from the back of a blue trailer at the University of the Sunshine Coast,” Meehan said.

“When I went to bed the night after being appointed I was apprehensive about participation numbers, were the kids going to turn up? And if we had enough volunteers to ensure that everything would be done effectively and efficiently.”

This year Meehan was recognised for his hard work and commitment with the first life membership at Kawana Park.

Meehan’s work and idealisations about increasing participation numbers through structured coaching models and facility upgrades has been supported 100 per cent by fellow Eagle volunteers and the AFL fraternity on the Sunshine Coast.

AFL Queensland Club Development Officer, Paul Tresise has been a part of Meehan’s journey and watched as he guided the Eagles to the pinnacle where it stands today.

“Paul Meehan is a fantastic leader and that has been reflected in everything that he and the Kawana Park Eagles have achieved over the last seven years,” Tresise said.

“Under the guidance of Paul Meehan the Kawana Park Eagles built a club around the AFL mission to increase participation and improve facility infrastructure, but none of this happened over night, Paul and the Eagles committees had a strategic vision of where they wanted to be- they have gone above and beyond that vision.”

Meehan acknowledged the support from the Club volunteers and stressed the importance of having a hard-working team around to ‘kick goals’ and achieve club success each and every season.

“The things that this club has achieved and where we stand today really is unbelievable, never in my wildest dreams did I think we would field a Youth Girls football team or be the third biggest club in the junior competition or that we would be sitting in this brand new building,” Meehan said.

Through Sport and Recreation Queensland funding in 2011 the Eagles obtained funding to build their very own players amenities on Kawana Waters State College.

The Eagles this year held their AGM in the new building (almost complete) and it seemed fitting that Meehan exited his role which will now be occupied by Debbie Linton with David Moles assisting as Vice President.

“Paul has to be the best club person that I have ever come across, I have been involved with a number of sporting volunteers in my time and across a number of sporting codes and Paul has been an integral part of building this club to a point where I am proud to have my kids playing at Kawana Park,” Moles said.

“He has created the ‘field of dreams’ here and it really is an honour to be involved at this club working with Paul and providing kids with access an amazing AFL club.”

Meehan departed with this advice:

“Follow a process and plan, everything will then fall in to place, having a strategic plan has given this club direction, guidance and something to strive for on and off the footy field,” Meehan said.