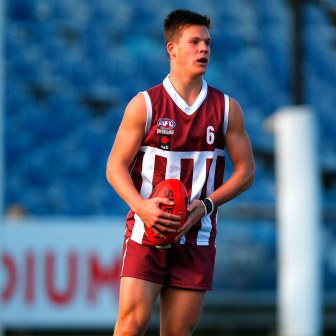 Queensland Under-18 representative, Isaac Conway, is blogging about his season.

One of the best parts of playing football is that each week is a new game.

Playing back at Yeronga last Saturday, against Vic Metro, was a great opportunity to redeem ourselves after a disappointing first game against the Calder Cannons.

Going into the game, I was a lot more nervous than usual and I really felt like the stakes were higher, going back to our home ground and starting nationals.

We talked a bit about the chance to redeem ourselves against the Vics, and I was really excited to have a chance to step up.

A lot of the older guys in the group felt a bit of external pressure, I think, to really step up against Metro, and prove ourselves a bit.

That said, I tried to block out a lot of that pressure and try not to think about what’s going on and I really thrive on the chance for redemption and to help the team do its best.

On game day, I tend to go through the same routine, just a quiet brekky and shower.

I guess it sounds a bit weird, but I tend to avoid people  on game day and I really don’t like talking much before a game.

Even in the warm up, I tend to stay to myself and stay pretty quiet because I really want to put all of the enthusiasm I have into playing well and I tend to feel like talking wastes a lot of that energy.

Once the game actually starts, all I am thinking about is the next play and where the ball is going to go.

At half-time on the weekend, I think a lot of the guys were a bit surprised that we were only two goals down, and with a chance to win, at half time.

Plenty of people wouldn’t have expected us to be so close, and probably some of the younger guys in the side were a bit intimidated going into the game, not that it showed.

So, the whole side was really enthusiastic heading into the second half and we were feeling really good.

I go into every game thinking I’m in it to win and I really didn’t want to lose just because it was Vic Metro.

Unfortunately, they just kicked away a bit in the end and it was a tough as to pull back five goals.

After games, I tend to go over what’s happened in my head a bit and think about the game a lot, especially if we’ve lost.

I also make sure I do all of my recovery – ice baths, stretching and everything, because those are the really important things.

I’m really looking forward to playing SA next weekend, because we’re only going to keep getting better.

I think a lot of people will expect them to beat us, but I don’t let outside pressures affect me.

We really want to win and we’re going to give it a red hot crack.