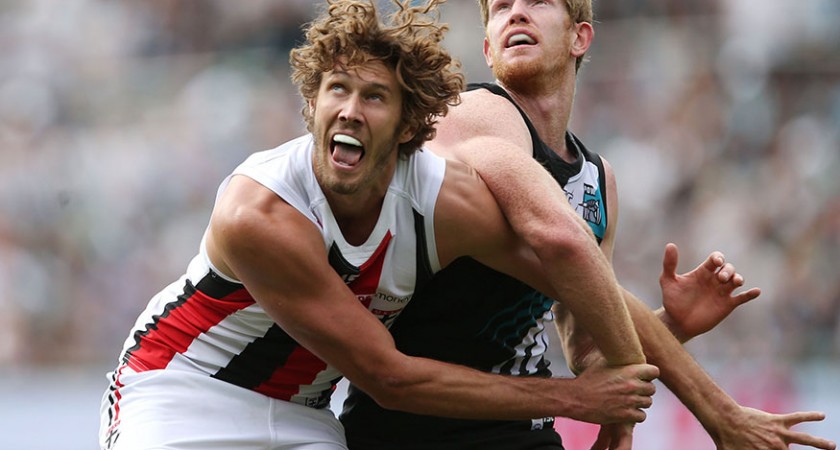 Tom Hickey has written his name into the Queensland AFL record books with a career-best performance for St.Kilda in the season opener against Port Adelaide in Adelaide on Sunday.

Hickey had 56 hit-outs – the most ever by a Queenslander in an AFL game.

The herculean effort by the 201cm volleyball convert surpassed the previous Queensland best of 52 by Shaun Hampson for Richmond against the Brisbane Lions at the Gabba in 2014.

The 25-year-old  ruckman also had a career-best 20 possessions and six clearances in what he will be hoping is the start of a breakout season after an injury-disrupted start to his AFL career.

Hickey’s hit out half-century shot him to the top of a list of 13 Queenslanders who have had more than 30 hit-outs in an AFL game. It is:-

An Alexandra Hills junior and 2010 Morningside QAFL premiership team member, Hickey has been denied a chance to really deliver on the promise that saw him taken by the Gold Coast Suns as a zone priority selection ahead of the 2010 AFL National Draft.

He played second fiddle to ex-Brisbane ruckman Billy Longer at St.Kilda for much of an injury-disrupted 2015 season, but is coming off the best pre-season of his career.

“It’s the first time I’ve felt injury free for a while, and I’ve come off a pretty strong pre-season,” Hickey told the AFL website over the weekend.

“I’ve done a mountain of work and I think it’s finally starting to pay off a bit … I was happy with the way I played.”

St.Kilda coach Alan Richardson was full of praise. “That’s as good a game as Hickey’s played for the club … for him to have over 50 hit-outs but also get 20 possessions and really get involved offensively,” he said.

Hickey’s record breaking effort came as his St.Kilda captain Nick Riewoldt posted a special milestone of his own in the opening round of his 16th AFL season.

From 46 Queenslanders on the playing lists of AFL clubs this season, 18 played in Round 1 after Brisbane’s Daniel Merrett was a late withdrawal due to illness.

Alex Sexton and Clay Cameron had career-best possession hauls with 23 and 15 respectively in Gold Coast’s big win over Essendon, while Zac Smith, in his first game for Geelong after an off-season trade from the Gold Coast, kicked an equal career-best three goals.

Kurt Tippett, playing in the ruck in Sydney’s big win over Collingwood, has an equal career-high 32 hit-outs.

St.Kilda’s David Armitage was the leading Queensland possession-winner in Round 1 with 28, just ahead of teammate Sam Gilbert (27). Tom Bell had 26 possessions in his first game for Brisbane following an off-season trade from Carlton.

Charlie Dixon, who kicked three goals in his first game for Port Adelaide, joined ex-Suns teammate Zac Smith as the leading Queensland goal-kicker in Round 1.