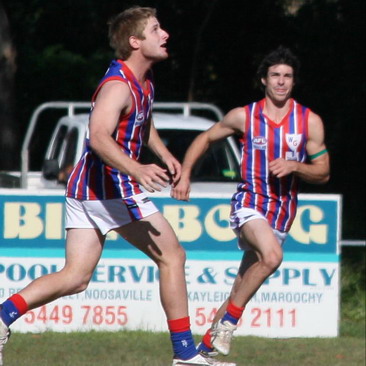 WILSTON-Grange reclaimed second spot on the ladder after demolishing Springwood by 92 points at Lowe Oval on Saturday.

And it was the dominant firepower up front that featured most in the win, by 23.15 (153) to 8.13 (61), that most satisfied winning coach David Martin.
Key forwards Dan Collins (six), Tim Nicolson (five) and Anthony Penny (four) kicked 15 of the Gorillas’ 23 goals.
“It was good to kick a decent score,” said Martin, who described proceedings as ‘a good job done’.
“They (Springwood) were pretty lively early and it was windy but my blokes were pretty good after half-time.
“We’re looking for consistency quarter by quarter, week by week, so they dug in.”
The game was always under control of the Gorillas, who set up a quarter-time lead of 7.0 to 4.4 before leading by 32 points at half-time.
Their best were midfielder Cale Agosta, Collins up front, and half-backs Michael Rogers and Lee Smith.
Springwood, who expect to get four key players back for next week – they being captain Shane Murrihy, Tiger Monk, Aaron Richardson and Andrew Sponneck – were reasonably happy with the effort put in.
Long-serving official Graham Murrihy said the Pumas had up to seven of their best players unavailable on the weekend but the youngsters stayed with the Gorillas before running out of steam after half-time.
Ruck-rover Michael Grose was again a prime mover for the winners, well supported by fellow ruck-rover and defender Matt Hockley and back pocket Alex Quirk.

SAME OLD, SAME OLD FOR MAYNE
LIONS WIN, BUT AT WHAT PRICE?