LIONS WIN, BUT AT WHAT PRICE? 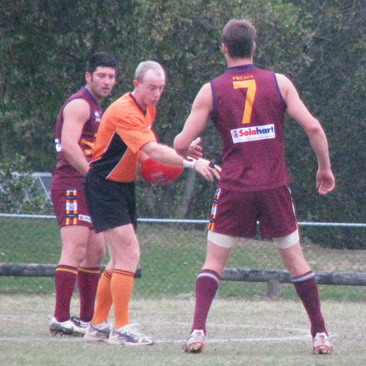 PALM Beach-Currumbin officials will be closely monitoring key pair Lee Clark and Matt Boyd after they both sustained potential season-ending injuries during the win over Maroochy-Northshore at Salk Oval on Saturday.

Crack forward Clark separated his a/c joint when he landed heavily from a speccy and Boyd has a knee injury the Lions fear may terminate his 2011 campaign.
Those injuries, added to a slow start when the home side trailed the visitors early, were the only concerns for PBC, who eventually saw off Maroochy by 26.15 (171) to 16.7 (103).
That came after the battling Roos surprised the Lions by leading 6.1 to 5.2 at quarter-time.
That was an especially encouraging effort from the Roos, but they did not have the experience or firepower to go on with the job against one of the genuine flag contenders.
Stand-in coach Darren Beaufoy praised Maroochy for their effort which shocked the home side into action.
“For the first 10 minutes they were pretty good – but we were scrappy,” said Beaufoy.
“But after that we’ve kicked 21 goals and won by 11 – which is a positive.”
That PBC allowed a struggling unit to kick 100-plus points was surely a worry, the Lions being without key defenders Chris Williams and Damien Lyon.
“I’m not looking for excuses, but we finished with only 19 fit players,” said Beaufoy.
The Lions have next weekend’s bye to rest sore bodies before they head into a favourable run into the finals.
Maroochy coach Roger Delaney said Saturday’s was the best game his Roos have played this season.
“It was disappointing to end up with an 11-goal loss, but in the first quarter we beat them and in the last quarter we stayed with them,” said Delaney.
But a highlight was a rare double-figure haul from an individual player – perhaps the first time it has been done in AFLQ matches by a Roo.
Club product Jarrod Clarke, who did not play last year because of work in north Queensland, kicked 10.2 in a super-impressive performance up front.
Delaney said Clarke had been holding down centre half-forward, but the return of Peter Hay to that position has led to Clarke getting more freedom as the key attacker.
“He’d been pretty much holding down the fort as the only forward we had,” said Delaney.
“He has done a great job and now, all of a sudden, he has some freeman with Hay there.”
Others to shine for the Roos were on-ball trio Kane Tyson, Declan Magill and Jarrod Raun, regulars on Maroochy’s best player lists.
For PBC, local junior Nick Burton starred on a wing, fill-in ruckman Brent Pearson toiled willingly, versatile veteran James Drake played key roles in both attack and defence and ruck-rover Brad Hewat again stood out.