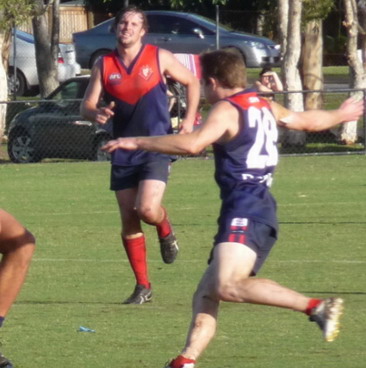 DIFFERENT week, same old story for the Mayne Tigers, who have again thrown away an early lead to remain winless for the season.

This time it was Surfers Paradise, clinging on to finals hopes, who added to the misery of the Tigers by beating them by 21.12 (138) to 14.9 (93) at Everton Park on Saturday.
A 45-point margin at full-time did not look on the cards early when Mayne built a19-point lead at quarter-time, hanging to an 11-point lead at half-time, then continuing on with the scrap until late in the third term when the white flag was hoisted.
Surfers kicked 19 goals from quarter-time to Mayne’s 9.5, adding another chapter to the season book of player-coach Luke Faulkner, who kicked five goals for his side.
“We just can’t play four quarters for some reason,” said Faulkner.
“We led until late in the third quarter, Surfers got a couple of goals from 50-metre penalties, then we couldn’t match them in the fourth quarter.
“We are missing a few midfield rotations at the moment, which is hurting us, and we ran out of legs.
“I was happy with the boys, but it’s the same old story every week. I’m happy with them for periods, but we’re always letting ourselves down in one or two quarters when the floodgate open.”
Faulkner, wing/half-forward Justin Moritz and back pocket Chris Azzopardi stood out for the Tigers.
Surfers coach Beau Zorko, now with three successive wins since taking over the head coaching role, expected a quick start from Mayne but was not happy with another slow start from his Demons.
“We knew Mayne would show up to play. They did, so I was really happy with the way we ground the game out and finished it off,” said Zorko.
“It was pleasing to not play so well, but win the game and finish it off.”
Of the turnaround, Zorko put it down to skill execution.
“Mayne were scoring from our mistakes rather than us controlling the ball. Once we rectified that we started to put some scoreboard pressure on them,” he said.
Asked why the Demons are starting so slowly, Zorko replied: “I’m not sure what it is. We can’t quite put our finger in it, but we certainly can’t afford to do the same over the next two weeks.”
This is when the Demons face up to Noosa (away), then Wilston-Grange (home), two matches that will determine whether Surfers can play finals football this season.
Captain Jacob Clark, who kicked three goals from the middle, was best for Surfers, Sam Folan also kicked three goals from a wing in a busy display and half-back flanker, teenager Brody Haberfield, was again prominent.