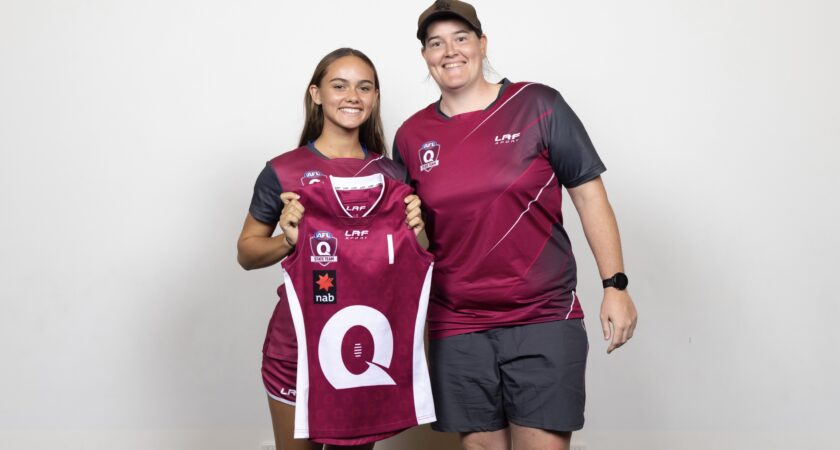 Fresh from a superb year with the Gold Coast SUNS, AFL Women’s Premiership player Sarah Perkins has switched her attention to inspiring the next crop of AFLW players.

Perkins has been announced as an Assistant Coach for the Queensland Under 18 state team, who’ll compete in the upcoming 2022 NAB AFLW National Championships.

“I’m really excited for the opportunity to be able to mentor the next generation of AFLW stars as an Assistant Coach for the Queensland Under 18 team,” said Perkins.

“The team that’s been assembled is full of talent and I see a lot of potential for these players to go on to become AFLW footballers.

“I hope I can play a role in coaching and educating these players to give them the best chance to make it to the highest level.”

The squad, which was announced earlier in the month, is comprised of Queensland’s brightest young talent coming through the ranks, which representation from North Queensland, Capricornia, Darling Downs and the Southeast.

The Championships allow our future stars of the women’s game to play the highest standard of underage representative football.

“Queensland female football is getting stronger each year and we want to expose these athletes to elite-level football as soon as possible,” said Iles.

“The Championships will be a fantastic opportunity for these girls to showcase their talent and put their names forward ahead of the AFLW draft.

“I’m excited by the talent we have in the ranks and the experienced heads we have around the team and am confident we’ll be able to match it with the best teams in the country.”

Queensland will begin their campaign on Tuesday, April 19 against Victoria Metro at Metricon Stadium.