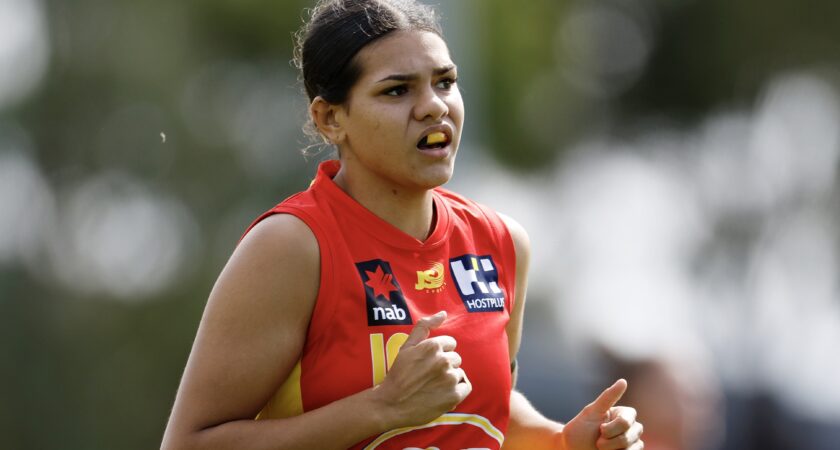 A squad of 28 girls has been named in the Queensland Under 18 State Team to take part in the upcoming NAB AFLW National Championships.

The 2022 NAB AFLW National Championships will begin this Sunday, March 20 and run throughout April. The Championships will involve under 18 representative teams from Queensland, Victoria Metro, Victoria Country, New South Wales/ACT*, South Australia, Western Australia and the Allies (combined Northern Territory/Tasmania team) playing three matches each at venues across the country.

The reshaped program structure ensures that the future stars of the women’s game across the country will be given the opportunity to play at the highest standard of underage representative football this year as part of their elite development, while ensuring the NAB AFLW National Championships can proceed in the safest possible way.

“I’m really excited about it – it’s a good mix of ages, there’s some good under 16 coming through, there’s good representation from North Queensland, Capricornia and the Darling Downs and overall there’s some real high-end talent,” he said.

From Cairns – dynamic duo, the Cockatoo-Motlap twins have been named, while from Southeast Queensland, Fleur Davies, Ava Seton, Caitlin Thorne and Ella Smith are names to watch out for.

“It shows all of the regions play a part in our state team,” said Browning.

“One of the biggest positives is with the possibility of the AFLW season coming forwards, these National Championships are even more important for the girls. And the reality is, in a few months some of these girls could be playing AFLW.”

Queensland will get their campaign underway on Tuesday, 19th April taking on Victoria Metro at Metricon Stadium, before backing up on Friday 22nd in Melbourne against Victoria Country.

They’ll meet the Allies (Northern Territory/Tasmania/New South Wales/ACT)* back home in Queensland on Saturday 30th April as the final game of the 2022 Championships.

The Queensland squad will play a practise match against the Maroochydore QAFLW side this Sunday, 20th March at 11am.

“The way the draw has worked we play the two Victorian teams which will be a big challenge with girls in both of those squads coming off the NAB League season,” said Browning.

“It’s a great challenge but it’s also a great opportunity for our girls to play against the best.

“The team will play this weekend and then play the first few rounds of QAFLW which will be really great preparation for them.”

*NSW/ACT was going to replace WA as the sixth team in the competition and will still retain standalone status for one game, when they take on an Allies team comprising players from Northern Territory and Tasmania on Monday 18 April.  With the opening of the WA border, WA will be part of the 2022 NAB AFLW Championships. As such, NSW/ACT players will rejoin Tasmania and Northern Territory as part of the Allies team in matches against South Australia and Queensland.