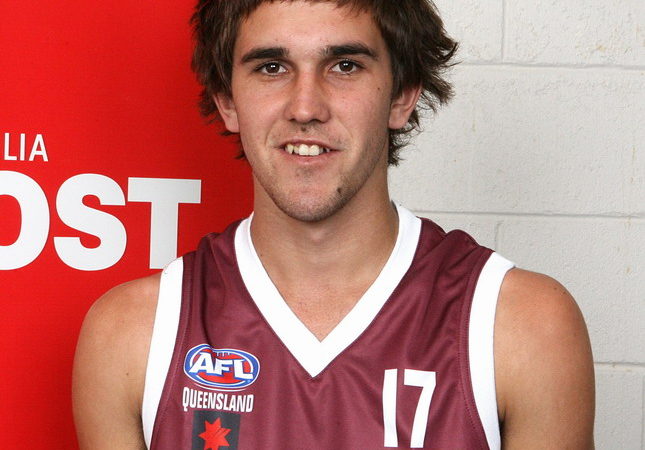 Selectors have made five changes to the Australia Post Queensland U18 Scorpions side for their second game in the NAB Australian U18 Championships on Sunday.

Selectors have made five changes to the Australia Post Queensland U18 Scorpions side for their second game in the NAB Australian U18 Championships against division one powerhouse Western Australia in Sydney.

This tops a big week for Bruekers and Sturgeon, who played last Saturday with the Lions Reserves in the QAFL State League.

Bruekers (pictured), a midfielder/forward who also played with the Lions last year and has played at senior level this season with Morningside, kicked five goals in a hard-fought win over the Western Magpies – believed to be a record for a top-up player.

For ruckman Sturgeon it was his first outing at senior level.

Pringle, too, had a big weekend – he was named the Magpies best player as a small forward/midfielder in what was new coach Jarrod Thorpe’s first game at the helm.

Slater, from the NSW country town of Young, was named at full forward to cap a meteoric rise with what will be his first championship for Queensland – he is new to AFL after being recruited from a background of basketball, cricket and rugby league.

Midfielder Tucker, returning from a hamstring injury, was a member of the Australia Post U16 Young Scorpions side that won the 2009 division two title undefeated.

Queensland are looking to turn around a narrow loss to Tasmania in their first game in Sydney two weeks ago when they failed to capitalise on a lot of scoring opportunities and a general dominance of the play.

WA, the defending champions, began their 2010 campaign with a heavy loss to SA in Adelaide last weekend and will be looking to get their title defence back on track.