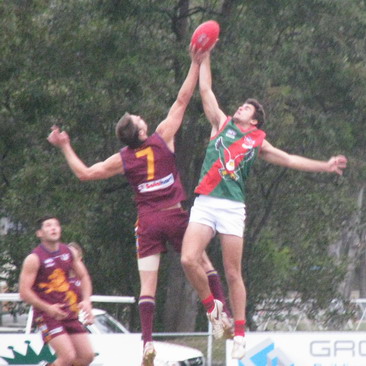 LAST season’s runners-up Sandgate have surged to outright leadership of the Pineapple Hotel Cup after a thrilling win over Palm Beach-Currumbin on the Gold Coast on Saturday.
The Hawks prevailed by four points in a pulsating clash at Salk Oval, a victory that put them four points clear of former co-leaders Wilston-Grange, who had the round-nine bye, and the Western Magpies.
In another key match on the Gold Coast, new Surfers Paradise coach Beau Zorko masterminded the Demons to victory over Burleigh, the Bombers going down by 37 points.
In other matches Noosa, took the Sunny derby, beating Maroochy-Northshore by 116 points on the Sunshine Coast, while the Western Magpies had a much tougher-than-expected success away to battlers Springwood.

SOME inexcusably poor discipline, dumb mistakes and incredibly accurate kicking for goal by their rivals combined to thwart Palm Beach-Currumbin in the Pineapple Hotel Cup match of the round at Salk Oval on Saturday.
The match of the round lived up to its billing as Sandgate downed the Lions by 22.6 (138) to 20.14 (134) but PBC coach Craig O’Brien was adamant his Lions should have taken the four precious premiership points.
“We were the better side all day, we just didn’t win,” he said.
A total of 34 scoring shots to 26 suggests the Lions had most of the chances, but Sandgate’s final tally of 22.6 also suggests they converted most of their chances.
“Yes, it was unbelievable kicking, they never missed,” said O’Brien.
Yet accuracy was only part of the story behind why the Lions lost. They coughed up four goals late in both the first and second quarters, all through either poor discipline or basic skill errors.
“We got three or four goals up a couple of times, but then we made a couple of blues and let them back in,” said O’Brien, who is set to unload on some of his senior players for a lack of discipline.
“Sandgate really hurt us on our turnovers. They got eight goals in the first quarter and I reckon six of them came from our basic errors.
“We’re letting sides back in because of our dumb discipline and errors. Turnovers are killing us – and that’s a pattern coming from three losses against top sides.
“It was a really disappointing result. We should have won but we have no one to blame but ourselves.”
It also galled O’Brien to watch Sandgate’s super veteran Danny Dickfos kick four of his five goals from free kicks.
But as much as O’Brien thought the Lions were the better side, Sandgate captain-coach Ben Long understandably thought otherwise.
“OB has a couple of valid points, but I don’t think the better side wins if the opposition comes from 22 points down in the last quarter,” he said.
“Palm Beach just didn’t take their opportunities – and we hung in tough and when we needed to find a goal we managed to.
“You don’t luck when you kick 138 points – and on their ground.
“I reckon they definitely had plenty of opportunities to put us away. Good sides kick those goals and they didn’t.”
Adding credit to the Sandgate late Sandgate surge to victory was the fact they did it with star on-baller Matt Nuss at hospital to have an eye injury checked out as well as Dickfos being restricted by his troublesome hamstring soreness.
Big Brendan Forbes, somewhat of a sleeping giant for the Hawks, turned on a brilliant performance in the ruck in the absence of Michael Pettit.
Half-back Todd Banfield, who sparked the Hawks in the final term with his run from defence, was also a star on the day and Dickfos and on-baller Ben Beaven also performed strongly.
Palm Beach had midfielder Brad Horn, last year’s Duncanson-Todd Medallist, as their best, along with back pocket Matt Boyd, Mr Versatile James Drake (six goals) and ruck-rover Brad Hewat.
While Sandgate continue to set the pace, PBC now find themselves back in the dogfight for fifth place, Saturday’s loss allowing Surfers paradise to draw level on 16 points.
Good news for the Lions is that they should get some handy players back shortly – including Ben Walters, Lee Clark, Ryan Hards, Chris Williams and Darryl Dyson.
The bad news is that the Lions face up to premiers Noosa next weekend, a game that will surely determine whether they can finish in the top three for the finals.

ZORKO GETS DEMONS BACK ON TRACK
BLUES LAST QUARTER BLITZ