ZORKO GETS DEMONS BACK ON TRACK 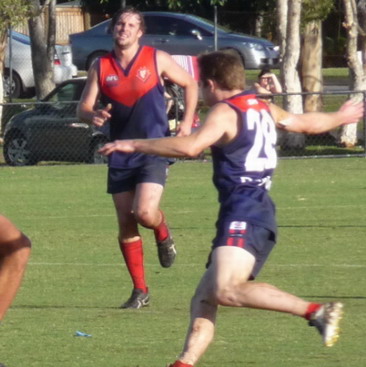 SURFERS Paradise made light of their internal blow-up by giving new coach Beau Zorko his maiden seniors win on Saturday.

Taking over as head coach from Rob Martin, who departed the club in a surprise development last Monday, Zorko watched as his Demons downed Burleigh by 37 points in the Gold Coast derby at Bill Godfrey Oval.
A telling second quarter, when they kicked 4.9 to 2.2, set Surfers on the way to victory by 19.14 (128) to 14.7 (91).
Zorko, who at 26 is younger than several of his players, was obviously delighted with the win which put Surfers level with Palm beach-Currumbin on the Pineapple Hotel Cup ladder.
“I think we were able to implement some structures that were simple but which we felt would be best for us,” said Zorko after the Demons snapped a four-match losing streak that led to the demise of Martin.
“You can see by the spread of goalkickers (10 in all) that it all worked for us.”
A new-look Surfers attacking set-up, which featured veteran Simon Fenton as a crumbing forward, worked well.
After a horror start to the season, which has been plagued by injuries, Fenton may be just starting to find his footy legs again and could be ready to produce the sort of form that landed him the inaugural Duncanson-Todd Medal a few seasons back.
Youngster Jordan Pope on a wing, Ryan Dienjes in the middle and ruckman Nick Barling, playing on permit, stood out for the Demons.
Zorko and his rival Zane Doubleday agreed the second quarter was the difference, although Doubleday was critical at the number of errors that blighted the Bomber cause.
“They (Surfers) were pretty good and I thought a couple of their younger players made a difference, but we just wasted the footy,” he said.
“We had a lot of opportunities and according to my stats we won all the clearances. But we just turned the footy over – our skills were terrible.
“I guess you can use the footy only as well as the opposition lets you.”
Doubleday admitted the road ahead, if the Bombers are to play in the finals again this season, is a rocky one.
“We’re not giving up on that, but to get there we need a lot of luck and a change in form from the playing group,” said Doubleday.
Burleigh were best served by forward rover Nathan Sullivan (five goals), midfielder Matt O’Brien, improving centre half-forward Mitch Wren and half-forward Josh O’Connell.