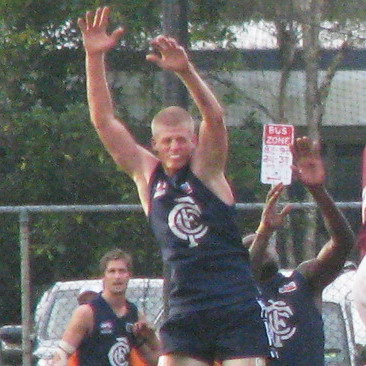 REMEMBER last year when Coolangatta kicked 13 final-quarter goals against Mayne at Len Peak Oval – yet still lost the match?
The ghosts of Len Peak Oval must have remembered that remarkable clash because on Sunday, at the same venue, Coolangatta produced another remarkable final term – but this time they took the bacon home.

Trailing by 27 points at three-quarter time, the Blues came up with a burst of eight goals to one to steal a stunning victory – perhaps maybe even a finals pipeline – by 15.12 (102) to 12.14 (86).
The precious four premiership points took Coolangatta to equal fifth on the ladder – with two other Gold Coast sides Palm Beach-Currumbin and Surfers Paradise.
At this stage of the season, after nine rounds, it appears certain one of those sides is going to take fifth spot for the finals.
And it was the danger of missing the top five that spurred the Blues to their final-term heroics.
Coach Neil Mackay saw the season slipping away when his side trailed by 27 points at three-quarter time.
A stern message at the huddle, some clever positional manoeuvring and, bingo, the Blues were in business.
Mackay moved midfield linchpins Daniel Hawkins and Sam Carins to the forward line and he told the rest of the troops to abandon their futile handball-out-of-the-pack tactic and kick the football long to the goal square.
“I told them their season was on the line because we could have gone 3-5 after dropping a game to the bottom side,” explained Mackay.
“Our plan was to win the stoppages and belt the ball forward to the top of the goal square instead of trying to handball it out of the contests.”
Coolangatta were given plenty of drive from three pre-season unheralded players – midfielder Andrew Haines and wingmen Nicholas Lock and Sam Fife.
Haines spent some time in the reserves, but has blossomed into a consistent contributor since being given a run in top grade.”
“He got us going,” said Mackay of Haines’s efforts, especially in the last quarter.
Mackay also praised the silky skills of 18-year-old Fife, who he said was clean at the ball all match.
The mood in the Mayne camp after the collapse was understandably sombre.
Player-coach Luke Faulkner was a shattered man after blowing such a lead – his Tigers again finding a way to lose a match they looked to have had in their keeping.
“I’m devastated,” he said. We had three shots right in front in the last quarter that could have sealed it for us, but we missed them all.
“We should have won because we worked so hard – and to have the lead, and lose like that, I’m absolutely shattered.
“Everyone thinks we’re nothing, but we’ve been in games all season – we just can’t get over the line.”
Veteran Andrew Housego was the pick of the Tigers, kicking three goals up forward before a role in the midfield.
And half-back flanker Sam Paterson and ruckman John Seccull gave their all and did not deserve to be part of the final result against their side.