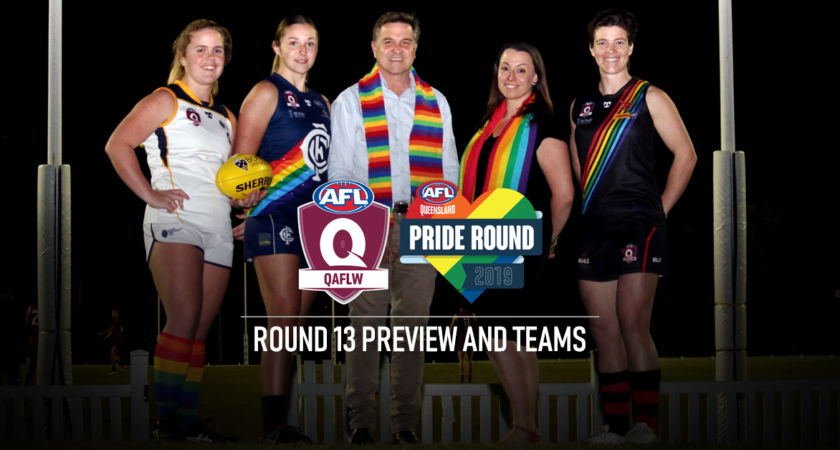 A win over eighth placed Aspley could all but seal a maiden finals berth for Maroochydore if they head home from this weekend’s historic Pride Round at Moreton Bay Central Sports Complex with the four points in the bag.

Last week’s emphatic win over Coorparoo at Giffin Park handed the Roos a break point in the mid-table log jam, sitting one game ahead of the Kings, Red Lions and Bluebirds who will likely all battle it out for the final spot in the four.

Luckily for Maroochydore too, the Bluebirds and Red Lions also face the first and second place teams this weekend, meaning a win against the young Hornets would all but punch their ticket to the final four.

For the contest, the Roos have named almost an unchanged line-up that slayed the Kings on the road last weekend.

Jennifer Carden-David is the lone change for the green and gold with the side bolstered by the return of newly minted Gold Coast SUNS AFLW signing Kate Surman.

For Aspley, Michaela Campbell will miss the contest as one of four changes for the Hornets while Renee Weller and Sarah Giles are among their inclusions.

It’s quite fitting that Round 13, the penultimate home and away weekend in the QAFLW calendar, will all be played at the one venue.

Not only for the togetherness of promoting LGBTIQ+ inclusion in the sport but given the high stakes nature of the final two rounds of the season.

The destiny of University of Queensland rests solely in their own hands and that begins this weekend in a must-win game against Yeronga.

The Red Lions’ final stretch of the season is tough for a number of reasons.

They play the second and third ranks sides to round out the year and as one of three teams vying for the final place in the top four, they must win at least one of those games.

Despite Yeronga’s superior place in the QAFLW standings, the Red Lions can rest assured knowing they don’t have to do something both Coolangatta and Coorparoo must over the next fortnight – play Bond University.

And if the Bull Sharks manage to come away with wins in their matches against the Bluebirds and Kings, as they likely should as the likely minor premier this season, it leaves the Red Lions to claim the four points against either the Devils or Roos.

The contest will see the Red Lions usher back in equal leading goal kicker Megan Hunt and fellow forward Dakota Davidson, who have the propensity to lift the Red Lions to secure the four points and thus a likely place in the finals.

For the Devils, Jade Ransfield, who is Hunt’s equal in the overall goal kicking tally, will miss the contest as a host of changes for Yeronga which will also see midfielder Jordan Zanchetta miss.

Dee Heslop, Jacqui Yorston, Jessy Keeffe and Jade Pregelj will all come in for Yeronga while Sharni Webb will miss for the Red Lions.

Late-season injuries have once again threatened to derail Coolangatta’s premiership quest for what will be the second season running as they prepare for this weekend’s crucial Gold Coast derby.

Significant injuries to spearhead forward Bri McFarlane (elbow) and tough defender Indy Sleeth (ACL) in last weekend’s contest against the University of Queensland have added a devastating blow for both players and team.

McFarlane, since returning from a shoulder injury that prematurely ended her debut AFLW season has booted five goals in seven games, while Sleeth has emerged as one of the competition’s most dependable defenders this season.

The Bluebirds, still in the hunt for a place in the top four, have already had some injury concerns this season and without consecutive wins since the opening two weeks of the season, are teetering on falling from the finals bracket with the key injuries only hampering their chances.

A showdown with ladder leading Bond University makes things even tougher for the Bluebirds who have beaten the Bull Sharks once in team’s four meetings in the QAFLW stemming back from Round 2 last year.

While McFarlane and Sleeth will both miss, Coolangatta will benefit from the returns of Selina Priest, Holly Mirfield and Alex Hamlyn who all return to bolster the line-up.

For Bond University, who have already secured their place in the finals for the first time, a host of star names have been included in the team.

Georgia Brehmer, Kalinda Howarth, Molly Riston, Lauren Bella, Tiarna Ernst, Arianna Clarke and Lucinda Pullar will all return for the team while Emmii-Lee Zanker Close and Taylor Smith are among the team’s omissions.

Coorparoo’s shocking Round 12 loss to Maroochydore has meant the near-perrenial finalists are on the verge of missing post season action – a fact that would all be cemented if they fall to Wilston Grange this weekend.

The Kings have long been a powerhouse of the QAFLW competition having made the finals in five of the past six seasons but that lone miss, which came in 2016, could double should they not win this week – especially given their tough fixture in Round 14 against Bond University.

As it stands, Coorparoo sit on par with University of Queensland and Coolangatta Tweed, however trail significantly in the percentage column meaning a sizeable win over the reigning premiers

The Kings though, will benefit from a number of inclusions in the Grand Final rematch against Wilston Grange, welcoming back dynamic midfielder Sally Young as one of six changes to the navy blues.

Tori Groves-Little, who earned best on ground honours for the AFL Queensland Emerging Talent team in their win over the WAFLW All Stars last weekend in Perth, will also line up as will Jade Ellenger, Jenae Govan, Mary Ross and Tahlia Hickie.

Emma Zilke will miss the crucial content however as she ventures north to her roots in the Wide Bay region.

For Wilston Grange, the Gorillas have been bolstered by four tall inclusions for the contest including Clare Lawton, Emm MacNeill, Kate Lutkins and Chloe Litherland to bolster the team’s key positions across the field while Cathy Svarc has also been named.