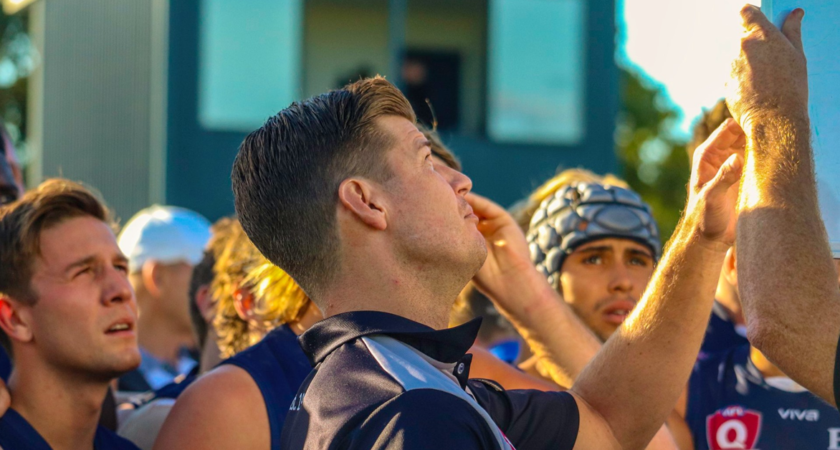 Broadbeach’s reward for finally beating a side in the QAFL top five was to grab second spot on the ladder in what could be a key result come finals time.

In a nutshell, Morningside were lacklustre and their tactics of adopting a short-kicking, keep opposition hands off the football methods, backfired badly.

The Panthers had a whopping advantage in uncontested marks but they failed to make an impact at the scoring end.

In fact they had only four marks inside their forward 50m for the game as they fell to an on-fire Cats defensive unit.

“We had a lot of uncontested marks in first quarter but they were all D50/centre back, so we tried to move that up the ground,” said Panthers coach Clint Watts.

“But that game was all about pressure – and we were out-pressured.

“It was all about both teams coming off pretty ordinary games the week before but one tam responds and the other doesn’t.”

For the Cats it meant getting rid of a season-long monkey from their backs, Morningside becoming the first top-five side they have beaten.

Coach Beau Zorko was rapt that his players responded so well to their dismal effort the previous round against Surfers Paradise.

“We were better in the midfield today and we worked a lot harder than last week, but our defensive structure, we nailed that today,” he said.

“To keep them to five goals was really pleasing.”

Also very pleasing for the Cats was the performance pout in by makeshift ruckman Luke Dempsey-Ceh, a local who was born at the now-demolished Gold Coast Hospital in Southport.

Standing out with his man-bun hairstyle and beard, Dempsey-Ceh had an early birthday – he turns 27 on Monday – with arguably his best game at the club since he switched to Australian football when he was 18.

Up until then Dempsey-Ceh played rugby union when he was enrolled at The Southport School.

So he has been in the Broadbeach system for almost a decade witho9ut ever cementing a place in the seniors. He may have done just that now.

“We really made him earn his stripes,” said Zorko.

“He kicked 15 goals in two weeks in the seconds so we gave him his chance in for this block of games. I thought he was outstanding.”

Veteran ex-Collingwood big man Jason Cloke continues to deliver great service for the Cats. He kicked 4.2 on Saturday and gave the Panthers defence a hell of a time.

Teenager Aiden Fyfe, last round Rising Star Award nominee, was again polished. He and Josh Searl rarely turn the ball over when they get their hands on it.

“Joel Newman was brilliant at half-back and I thought Jayden Rymer made a difference for us in the midfield,” said Zorko.

Darcy Cameron-Reeves kept hanging in there for Morningside and Watts liked the work of Sam Godfrey on a wing and William Pendlebury at the back.

Next weekend Morningside host Labrador at Jack Esplen Oval and Broadbeach travel to Lemke Road Oval to take on Sandgate.

More may be heard of one of the QAFL’s longest games in history when premiers Palm Beach Currumbin scraped home against Mt Gravatt in a thriller at Salk Oval on Saturday.

But it appears certain that questions will be asked about why the four quarters went for so long.

The shortest quarter was the first at 37 minutes. The longest was the fourth, which went past the 40-minute mark.

PBC coach Jess Sinclair said he believed the way Mt Gravatt played the game, piling numbers around the contests and trying to choke the renowned Lions running game, played a role in the marathon.

“There were an abnormal number of stoppages and it seemed to take forever for play to restart,” said Sinclair.

His Mt Gravatt opposite Adam Boon played a diplomatic role when asked if the Vultures plan to take the matter further.

“I’ll leave that one to the president,” he said. “But I really didn’t expect the quarters to go that long.”

It was a bitter pill for Boon to swallow after losing his second successive game when opposition kicked two goals deep into red time.

The previous weekend Morningside kicked two goals at the death to beat the Vultures and this time it was PBC goals from Jesse Derrick and Jon Croad booting the winners after Mt Gravatt led by 10 points at the 29th minute mark of the final term.

Derrick’s third goal of the match came with 31min 59sec on the clock and Croad’s came at the 38:51 mark.

They remain fifth but are now under genuine pressure from Labrador and Western Magpies to stay where they are now.

Stylish playmaker Dylan Troutman continues to turn it on for the Lions in his role as attacking half-back.

Nick Crowley in the middle, Jason Burge on-ball and small forward Brock  Askey lifted their games to cover for the heavily-targeted Tom Thynne and Tyler Cornish in another example of PBC’s all-ground quality.

Concerns hang over defender Angus Munro, who is unlikely to play next weekend after copping a finger in his eye.

For Mt Gravatt Boon was rapt with Kyle Walsh through the midfield and during some time forward.

“He’s just a tackling machine and he gave us a lot in terms of shutting down Burge and Tom Thynne.

“Don’t be surprised if he didn’t have record tackling numbers.”

Corey McGuren, normally a small forward, went on-ball in the second half and performed similarly to Walsh at the coal face.

One-time Gold Coast Suns Under 18 hopeful Gerard Moore is adding plenty of ruck power as the Western Magpies continue to fight for a place in the QAFL finals.

The big man, now a police officer, starred for the second time in a row as the Magpies saw off cross-Brisbane rivals Wilston Grange at McCarthy Homes Oval on Saturday.

Former Brisbane Lions player Ryan Harwood proved to be the finisher for the Magpies with seven goals but coach Brydan Morgan had no doubts as to the value that Moore has added since his return to senior ranks.

“He had not been able to train for a couple of years so was playing semi-social Friday night footy,” Morgan said of his big man.

Moore was in the original squad of locals selected for the Gold Coast Suns Under 18 campaign in the TAC Cup.

Morgan said the improved handling and kicking skills of his side paved the way for the big win.

The lift in quality ball to the forward lines was telling in the final analysis.
Gorillas kicked first two goals, the Magpies responded with four of their own for an 11-point lead at quarter-time.

The home side opened the scoring in the second but the Gorillas roared back with four majors only to have the Magpies kick the next four to lead 9.5 to 6.2 at half-time.

Then came the now-familiar Gorilla killer – a second-half collapse when the home side put on 10 goals to one, including the last eight of the match.

Coach Barry O’Brien is resigned to similar things happening until the end of the season, pointing out that he had only four players aged 24 years or older out on McCarthy Homes Oval.

It is all about blooding youth and looking to the future he said of Grange, who had regular suspect Luca Mason as his best, well supported by Tom Smart when moved to the dangerous Brody Lumber, and midfielder Nick Dickson.

Surfers Paradise made light work of the absence of their attacking kingpins Dan and Matt Green in their big win against Sandgate at Sir Bruce Small Park on Saturday.

It was a victory that pushed Surfers up into third spot on the ladder, level on 36 points with Broadbeach (second) and Morningside (fourth) with only three rounds to go before the finals.

Next weekend, away to fifth-placed Mt Gravatt, is a big one for Surfers but that all lies ahead and on Saturday’s form, coming after the impressive derby win over Broadbeach, coach Brad Moore is entitled to be quietly optimistic of a top-three finish for the play-offs.

Without the Greens, Moore tried a few options and the best turned out to be Connor McKenzie, who kicked three goals, all of them after being shifted into attack late in the game.

“It was good to win without Dan and Matt,” said Moore.

Jack Prestegar across a half-back line was best for the Demons with his defensive work and attacking drive standing out.

Noa Corbett was good across the forward lines, Nick Scott and Jack Taylor at centre-half back were others to shine in defence.

Sandgate turned up after the drive down the M1 lacking any sort of fire.

Best for the Hawks was Jake Cole-Jackson, who has been a regular in the team since he arrived from Darwin.