QAFL Round 16 Preview and Teams 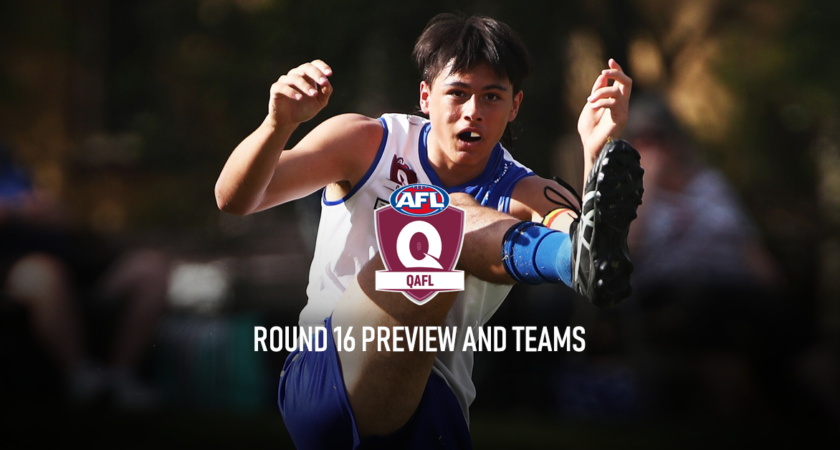 The rivals are currently second and third on the ladder respectively with the Panthers ahead of the Cats by just the one win but trail this weekend’s rivals by 20 percentage points.

The side finishing second after the preliminary rounds gets a home qualifying final.

“If you lose that you’d probably go to Paly – but that’s a long way away at the moment,” said Morningside coach Clint Watts of the possibilities coming up.

Watts did point out, though, that Broadbeach are effectively two games behind the Panthers because they have a bye to come.

This adds to the importance of the Subaru Showdown for Broadbeach – and they are coming off a disappointing performance last weekend away to Surfers Paradise.

At selection time Broadbeach made five changes and clearly went after some leg speed and mobility in their changes.

An interesting one is Papua New Guinean Hapeo Bobogi, who has returned to the Cattery from his homeland.

Bobogi is the older brother of Suns hopeful Hewago Paul Oea, who was a member and best player of the Broadbeach 2018 grand final side.

Hapeo played with Broadbeach in 2017 and was the club’s leading vote-catcher in the Grogan Medal.

Morningside regained two forward sparks in Eddie Mallan and Sam Godfrey, as well as top defender Nathan Beck, as three changes to the side that came from behind to beat Mt Gravatt in that unbelievable game in Brisbane last weekend.

Morningside’s start in that clash, when they trailed 51-1 at quarter-time, will not be repeated if coach Gary Watts has his way.

The last time Broadbeach and Morningside clashed was in the seventh round at Jack Esplen Oval in Brisbane when scored were dead level at half-time.

But the Panthers clicked into top gear and put on 10.4 to 2.2 after the big break to destroy the Cats.

It may not be the best thing that could happen – coming up against hot flag favourites a week after one of the most amazing collapses in QAFL history – but it could be a season-turned for Mt Gravatt on the Gold Coast on Saturday.

Mt Gravatt travel to creekside Salk Oval to face the music against Palm Beach Currumbin and face a test of character in that their reaction to last weekend just has to be positive.

Last round, after leading archrivals Morningside by 51 points at quarter-time, the Vultures fell apart and were beaten by a goal.

Stunned coach Adam Boon said he has watched two replays of the horror Saturday afternoon and hopes the result will be despatched to history.

He did, though, see some positives when asked what happened.

“We sort of changed the way we moved the ball and went into our shells after quarter-time,” he said.

“Maybe it was the psychology of players that changed after being 51 points up.

“In the first quarter we took them on and went for it and that’s what we need this weekend.”

Heaping pressure on to the Vultures is the fact that a loss, coming before away games against Surfers Paradise and Western Magpies, would seriously question the ability of Mt Gravatt to play finals.

Still unbeaten, 2017-2018 premiers Palm Beach will come in fresh after a bye last round, although their forward structure will be different with the loss of Mitch Johnson to Southport and the continued absence of Jack Anthony.

The Vultures will be without play-making Frazer Neate, a serious loss for them, among five changes to the side that fell to Morningside.

Boon knows how big a game this one is in context of the top five.

“They are all big games now,” he said.

“Of our next four we have to effectively win two to keep our spot in the finals.”

The equation is a simple one as far as the Western Magpies go – they simply have to beat cross-city rivals Wilston Grange on Saturday or their finals hopes will go up in smoke.

The Magpies take on the Gorillas at McCarthy Homes Oval knowing their play-off dreams are on the line – as they will be for the remaining three rounds after this weekend.

The Magpies are seventh on standings but are two wins plus percentage behind fifth-placed Mt Gravatt.

Against the Magpies is the fact that they have only three matches left to make up the ground because they have the bye next weekend.

“We’re still in with a good chance, it’s just that we need to win our last three and whatever happens after that will happen,” said coach Brydan Morgan.

Go back to Good Friday, when the Gorillas smashed the Magpies on a cold, windy and wet day, and that should serve as suitable motivational material for the Maggies.

Also to be considered is the fact that the Gorillas beat Labrador last weekend at the same time as the Magpies were edging out Sandgate.

At selection time the Magpies brought back key position utility Aaron Highlands, smart young winger Dan Edwards and forward Ethan Sivijs
They are in for Zane Lovell, Rhett Lloyd and Redland-bound Will Johnson.

The Grange have lost centerfield dynamo Daniel Farry for the season with a shoulder injury, Zac Molan, Declan Warren and Adam Hughes through injuries.

This gives the Gorillas an opportunity to push more youth back into the line-up with Taylor McCubbin back after surgery, Reed Maskell-Dobbyn for another crack at seniors and first-gamer Caleb Scott, a winger/half-back.

“The positive is we have a lot of good juniors coming through and we’ve got to reward them,” said coach Barry O’Brien.

Surfers Paradise coach Brad Moore has been left with some serious thinking about what his attacking pattern may be for a clash against Sandgate at Sir Bruce Small Park on Saturday.

Coming off a rousing last-round victory over Broadbeach, Surfers have lost key offensive pair, brothers Daniel and Matt Green, to take on bottom side Sandgate in what now looks a danger game for the fourth-placed Demons.

Moore has also lost midfielder Dylan Mutu to Southport in the NEAFL but at least he regains key defender Sam Jewell, back from the Sharks.

This at leaves Moore with the option of using star defender Brody Haberfield as his key attacker against an enthusiastic young Sandgate unit that is developing with every game played.

“Losing the Greens is unfortunate but we are able to bring up some players who had been in form but couldn’t get a crack at the seniors,” he said.

White is a midfielder-forward who was reserves best and fairest last year when eligible for the colts.

Toll and Curtis are both defenders.

Sandgate have lost two top players in Cody Stackelberg (to Aspley NEAFL) and Jordan Maynard, who is injured.

The Hawks brought back promising James Taglieri and Ben Hogan. This pair were both Rising Star Award nominations last year.

The Hawks were brave in their loss away to Western Magpies last weekend but it is a case of doing the same for four quarters according to coach Jarad Marsh.