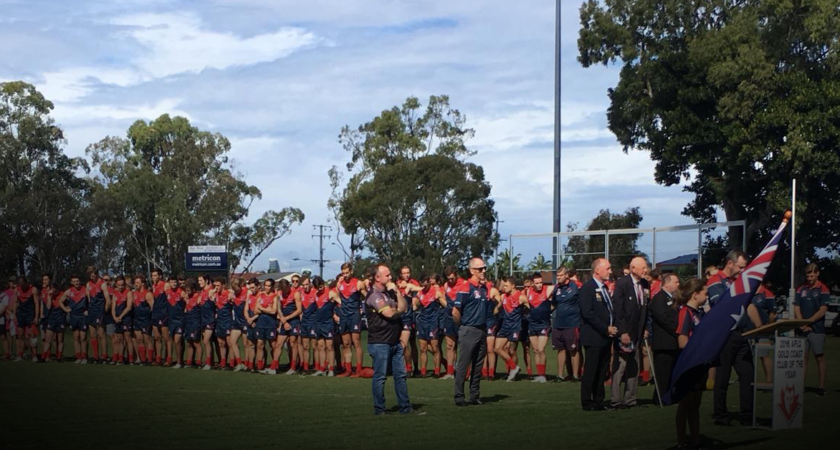 AFL Queensland, along with its clubs and competitions, hold ANZAC Day close to their heart and will commemorate ANZAC Round this weekend, April 24 to 28.

ANZAC Round aims to recognise and remember all Australians and New Zealanders who served and died in conflicts and peace keeping operations and commemorate their contributions to contemporary Australia.

Initially, in a show of respect, AFL Queensland prohibited community games to be played on ANZAC Day until it was realised there’s no better way to bring people together than some good footy.

AFL Queensland kicked off the ANZAC Day round some 50 years ago at Brisbane’s home ground of the Gabba before a ten-year hiatus from the ground before Sandgate and Coorparoo ushered in the return of the Gabba on ANZAC Day in 1976 with the Hawks winning by a mere six points.

In 2019, ANZAC Round will commence this Wednesday night with the traditional ANZAC Day eve showdown between QAFL clubs Wilston Grange and Sandgate at Hickey Park.

On ANZAC Day, the Rockhampton Panthers will host the Brothers Kangaroos at the Rockhampton Cricket Ground in the AFL Capricornia competition. Meanwhile the AFL Wide Bay competition will host a double header at Norm McLean Oval as Across the Waves Eagles host Brothers Bulldogs before the Hervey Bay and Bay Power showdown.

All competitions will observe a minute’s silence prior to the commencement of games.

Colts and Reserve will be held prior to the main game at 9:20am.

Colts and Reserves will be kicking off at 10:00am.

Another full day of footy with Colts, Reserves & QAFLW from 10:00am.

ANZAC service from 4:00pm with seniors kicking off at 4:15pm.

Senior Women’s game kicks off at 2:10pm. ANZAC ceremony will be held prior to the men’s game at 3:40pm, senior men’s match beginning at 4:00pm.

The game will commence at 2:00pm

The game will commence at 4:30pm