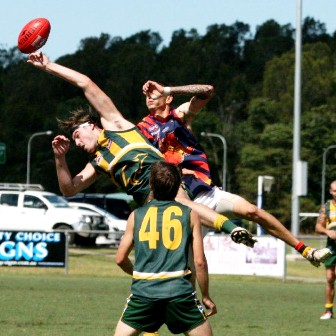 Maroochydore has a forward focus in 2013.

Maroochydore coach Brett Maloney has earmarked the 2013 Allied Pickfords Cup as a season for improvement.

Maloney said the Roos, who finished in eighth with four wins and two draws in 2012, had lacked forward potency last year.

The new senior coach has addressed this pretty swiftly, bringing in a slew of key forwards to the club to bolster its front half.

“We were specific in what we needed and what we were lacking. We picked up some pretty handy forwards,” Maloney said.

One of those forwards, Stuart McKenzie, was the leading goal kicker in the Townsville AFL last year.

As well as a handful of forwards, the Roos have nabbed Goulburn Valley vice-captain Michael Roberts.

While the club is still lacking a traditional key defender, Maloney said he would be focusing on attaining a balance of attack and defence in a bid to better its 2012 season.

“We’ll pay an equal balance of attacking and defensive footy,” he said.

“With the forward line we’ve been able to assemble if we can get it forward enough, we can be reasonably effective.”

Maloney said the mix of youth and experience that the club now has is beneficial for the SEQAFL, a competition which sees high player turnover each year.

“You’ve got to have a bit of both youth and experience because of the transient nature of the competition and your list can change so much in a season.”

In his first year as the Roos’ senior coach, Maloney said he wanted to implement a team first attitude.

“Egos need to be put to the side and everyone needs to be on the same page,” he said.

“We’re going to be pretty ruthless on that to the point where we’ll turn players over if they’re not adhering to that.”

After winning the under-18 title last season, there will be plenty of young talent waiting in the wings for the Roos in 2013.