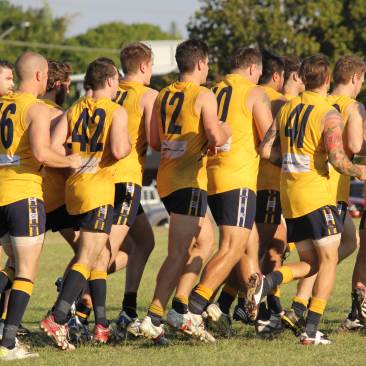 A wrap of the 2013 Alllied Pickfords Cup best and fairests

Warwick’s Brendan Iles was looking for a new challenge in 2013.

And the Springwood Pumas were only happy to give him one, with Iles joining the minor premiers for a season, travelling from Warwick for one training each week as well as games.

While Iles clocked kilometres well into the thousands for the season, it was well worth it, as he collected the Pumas’ best and fairest award, ahead of some big-name recruits.

After a year where the 27 year-old played a key role in the Pumas’ success, the humble midfielder said he was just grateful for the opportunity.

“Playing along with Albert Proud and Rhan Hooper and Jake Furfaro, it was a bit of an honour to put on a jersey and run out with those sort of quality players,” he said.

“The way the club opened up and let me come, it was great.

I met a lot of people and a lot of mates from the experience. I can’t thank Springwood enough.”

The Pumas have plenty to thank Iles for too, according to coach, Tony King.

“(Brendan) is pretty much the complete package,” he said.

“He’s a very good trainer. He just worked with the team and just led by example with his actions.”

“You always noticed the difference in level when he turned up to train.”

King said Iles’ game against the University of Queensland was one of the highlights of his season.

“His last quarter against UQ – we were getting a bit muscled out of it and were down to 17,” he said.

“He just needed to stand up and he played an amazing last quarter and put the game out of their hands.”

Iles’ stint at the Pumas wasn’t his first at a high level, having previously played for Morningside in the state league, before moving back to Warwick, and the 27 year-old said he was glad to have a chance to keep improving his footy.

Pumas football manager, Adrian Wallin, said Iles had easily fitted in and was never one to ask for special treatment, despite living so far away, even travelling from Warwick to Noosa and back in one day.

Iles is still undecided about his future, but admitted there was a feeling of unfinished business having made it so close to a flag this year.

“Not everyone get s to play in a grand final to make it there was an achievement in itself, but they say, you’ve got to lose one before you win one.”

Unity Cup launches in SEQ
McGuane happy to be home