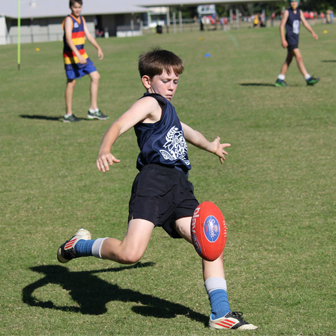 AFL Queensland has joined forces with RIO Tinto to grow local children’s involvement in AFL in the Central Highlands region.

AFL Queensland’s Hamish McInnes will be based in Clermont and will work closely with primary and secondary schools to deliver a variety of AFL programs.

He will liaise with local communities to establish AFL 9’s football and other opportunities to play and become involved with AFL, as well as providing support to the Moranbah Bulldogs AFC.

“The partnership with AFL Queensland offers an opportunity for young regional children to get involved in sport.

“But it’s not just about sport. It’s about getting healthy, making friends and being part of an activity that brings the community together.”

AFL Queensland CEO Michael Conlan said the partnership would have a far reaching effect on the local community.

“Having a full-time operative dedicated to the needs of the Central Highlands region is a significant step for AFL Queensland,” said Mr Conlan.

“The support of Rio Tinto will provide people of all ages the opportunity to play and become involved with AFL in the Central Highlands region and we are extremely grateful for their generous support,” said Mr Conlan.

Mr Conlan said Hamish McInnes would be a major asset to the Central Highlands community.

“Hamish is passionate about growing AFL in the region and his extensive experience working with the NAB AFL Auskick program, AFL Sport Education and coordinating junior development programs make him the natural choice for this role,” said Mr Conlan.