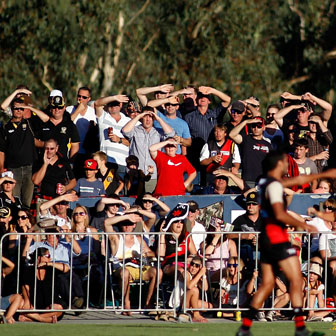 AFL coaches have joined forces with the AFL to promote good crowd behaviour at AFL matches this season.

A scoreboard message at every game will encourage fans to support their teams with respect for all, and features premiership coaches Chris Scott, John Longmire and Mark Thompson, as well as newcomers Alan Richardson, Justin Leppitsch and Adam Simpson.

In the form of a coach’s address, spectators – particularly adults – are reminded not to let their team down and about their responsibility to behave appropriately and set a good example for those around them. The scoreboard campaign will also detail the Anti-Social Behaviour text line for the stadium in which it is being shown.

Mr Evans said the AFL and the 18 clubs and coaches were committed to promoting a safe, inclusive and welcoming crowd environment at matches through the scoreboard campaign and other measures.

“There is a growing community awareness about what is and isn’t acceptable spectator behaviour at sporting events and it is pleasing that AFL crowds have become largely self-regulating when it comes to anti-social behaviour,” Mr Evans said.

“Fans overwhelmingly want AFL matches to continue to be played in a family friendly environment and this scoreboard campaign will remind everyone to always think twice before letting their passion get the better of them.

“There’s nothing wrong with spirited barracking and good humoured interplay between opposing supporters; these are long-standing elements that create atmosphere and make attending a game such a great experience. But there is zero tolerance for abuse, violence and vilification of any kind.”

Danny Frawley said that every AFL coach was supportive of the AFL’s efforts to ensure fans barracked for their clubs and favourite players with both passion and respect.

“Sometimes supporters can get caught up in the moment but there are lines that should never be crossed and we welcome this campaign to remind spectators to always do the right thing by both their team and the crowd around them,” Mr Frawley said.

Chris Scott said he was very pleased to be part of the campaign.

“As coaches we want our players to be passionately supported from the stands, but we don’t want spectators going over the top and using abusive or insulting language, especially in front of children,” Mr Scott said.

“Spirited barracking is fine, but there’s no place for anti-social behaviour and vilification at AFL matches, or anywhere else for that matter.”

Further to the scoreboard campaign, an AFL-convened industry working group has been reviewing the existing protocols for responding to and subsequently investigating complaints of anti-social behaviour, as well as the role of other authorities.

Mr Evans said the AFL aimed to ensure a consistent and endorsed process for recording and managing complaints across clubs and venues.

“In addition to raising public awareness, we are also monitoring trends and looking to develop a standardised complaints process as well as consistent terms and conditions for all AFL and Club memberships,” Mr Evans said.

“People should be in no doubt that being a face in the crowd no longer provides an anonymous platform to act inappropriately or to vilify players, umpires or other spectators. Everyone who goes to the football deserves a safe and welcoming environment in which to enjoy the excitement of our game.”