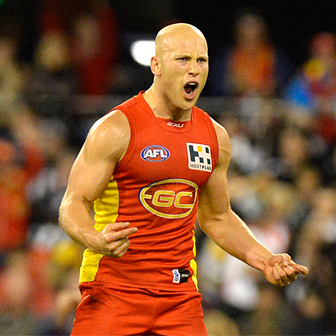 As a player who was always destined to draw comparisons to his dad, Gary Ablett Jr has achieved one feat that even the great Gary Ablett Sr could not – 250 AFL games.

After equalling his dad’s tally of 248 games against Carlton in round 18, Ablett will play his 250th match against Melbourne in career best form.

Ablett has enjoyed another stellar season in 2013, featuring in the top ten in a number of key statistical categories including total disposals, contested possessions, clearances and inside 50’s. This has led to Ablett amassing 30 possessions or more in 12 of his 18 games across the year.

And while there is no doubting that Ablett is the greatest midfielder currently playing the game, many experts agree that Ablett has already surpassed champions of previous eras including Greg Williams, Robert Harvey and Michael Voss.

Veteran Herald Sun journalist Mike Sheehan rates Ablett in the top 10 players he has seen to ever play the game.

“When you watch as much football as some of us do it’s very hard to be surprised,” Sheehan said.

“Yet this bloke continues to surprise, he is so elusive, gets in the tightest crushes and gets out unscathed.

“I would now have Little Gary ahead of Greg Williams and Kevin Bartlett in the top 10 players I have seen and ranking with Leigh Matthews in terms of midfielders/small forwards.”

While Ablett had already made his mark as the dominant member of Geelong’s star-studded midfield before he left in 2010, many questioned whether he could be as good at the Gold Coast Suns, where he would be without the assistance of the likes of Jimmy Bartel, Joel Corey and Joel Selwood.

That theory was quickly abolished, as Ablett starred in a team that won only three games for the year, amassing 23 Brownlow votes to finish equal fifth in the count while winning the inaugural Suns best and fairest award.

This trend has continued across Ablett’s past two seasons, and with the Suns young list becoming far more competitive in 2013, Ablett is every chance to win his second Brownlow medal.

Suns Coach Guy McKenna said that it is Ablett’s competitive nature which has led to him elevating his game to another level.

At Geelong, Gary was doing a normal crossword among the bevy of great players, success and leadership,” McKenna said.

“Up here it has become a cryptic crossword where his competitive nature and desire for his team to win that has driven him to another level.”

McKenna also said that the improvement of the young Suns has driven Ablett to show that he is still the best football player at the club.

“So when Harley Bennell was biting at his heels last year, (as well as) Dion Prestia, David Swallow and Tommy Lynch – all of a sudden with the group growing around him he just wants to know he can walk around and mark his territory and say, ‘hey, I’m still the best here at the Suns’.”

Ahead of his 250th AFL match, there is no doubt that Ablett remains the best player at the Suns, as he will surely be remembered as one of the greatest footballers ever to play the game.