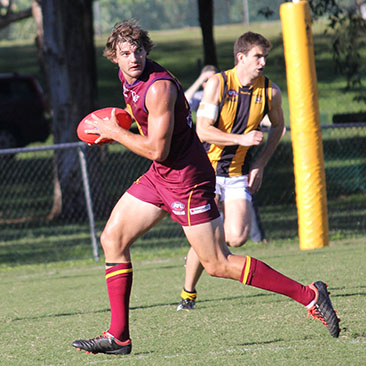 Marking brilliance is generally a forward’s domain, but it was the clean hands of Palm Beach defender, Jackson Emblem, that had the biggest say at Salk Oval on Saturday.

Emblem had by far his best game of the season, playing at centre-half back for the Lions.

The 25 year-old has been in and out of the Lions side this year because of work commitments, but has strung together three consecutive games, looking more than settled in the side.

With the late withdrawal of captain Angus Munro before the Tigers match, as well as the absence of a number of other senior players, Emblem set the tone for his teammates for much of the day, with his strong defensive efforts.

The former Broadbeach player was so influential in the Lions’ back line through the first half at Salk Oval, that he earned himself a tag in the second.

Emblem showed his sensational marking abilities in the match, cutting off the Tigers midfield delivery, almost as many times as they kicked it inside 50.

The defender is in his second season with Palm Beach, after playing 18 games last season and then a stint with St Mary’s in the Northern Territory Football League over summer.

Palm Beach coach, Daryn Cresswell, said Emblem was clearly the best from either side in the Rd 14 clash, and is certainly glad to have the defender back in his side with finals approaching.

“He is a class player,” Cresswell said.

“I reckon he took about 15 marks in the back line and he really set us up.

Cresswell said Emblem was one of a number of Lions players, including Tasmanian Zane Murphy, who set the tone for the side in any given game.

“He’s a bit of a barometer, and he’s one of the strong characters around the club,” he said.

As much as Cresswell lauded Emblem’s efforts, Mayne coach, Mitch Ferguson, lamented them.

“He is a good player, he put himself in the right spots and we just kept kicking it to him,” he said.