Ben Keays leads the charge for Queenslanders in the 30+ Club 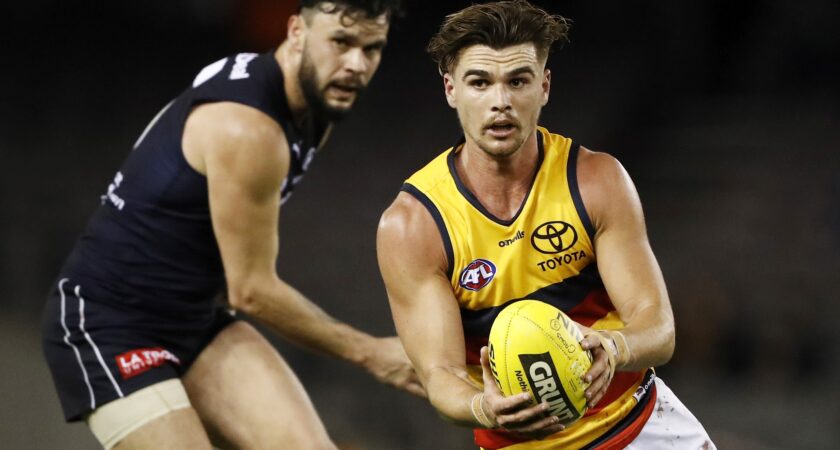 There’s an old saying that goes “lies, damned lies and statistics” that is applicable to football and often used colloquially in relation to what might appear to be inflated or meaningless numbers.

But sometimes the numbers and the statistics cannot be ignored. Like when Ben Keays has six games in a row of 30+ possessions, as he’s done for the Adelaide Crows.

The 24-year-old Queenslander, enjoying a wonderful second season at his second club, had 30 possessions in the Crows’ a loss to Carlton last weekend coming off the bye after he’d posted 32-34-31-33-31 five weeks in a row before the bye.

It gives him eight 30+ games for the season and places him prominently in the Queensland football record books that go all the way back to 1977 and a Sherwood junior turned Western Districts QAFL star.

Only 10 players have topped 30 possessions seven times or more, and only four players have had five or more consecutive 30-point games.

Keays, picked up by the Crows as a de-listed free agent in what is turning out to be a value-plus recruiting coup, has become a prominent part of this multi-layered trivia festival.

His live six-in-row run of 30+ games is second among Queenslanders on an Honour Roll that started right back in 1977 when a two-time Grogan Medal runner-up had 31 possessions and kicked a goal for Fitzroy against North Melbourne at Arden Street, now the Kangaroos’ training and administration base.

It was a game in which AFL Hall of Fame legend Malcolm Blight, now 70, had 34 possessions and kicked two goals in a 10-point North win, and 71-year-old AFL Hall of Famer John Murphy, in his 201st game, topped the Fitzroy possession count with 32.

It was lofty company for the 21-year-old Queenslander in his 36th AFL game, and it didn’t end there. Also in the Fitzroy side were Garry Wilson and Warwick Irwin, who would later join Murphy in what is now the Brisbane Lions Hall of Fame, and future Queensland Hall of Famers Norm Dare and Kevin O’Keeffe.

Dare, coach of the Queensland Team of the Century, was playing his 71st game and O’Keeffe, later Queensland captain in an era critical to the development of the game, his 70th.

Graeme ‘Gubby’ Allan, later to play a key off-field role in Brisbane’s 2001-02-03 premiership hat-trick, was in his 38th game for Fitzroy. And in just his sixth game at 19 and laying the platform for what would be key Brisbane father/son recruit was Brian Brown, father of Brisbane champion Jonathan Brown.

Wearing the #1 jumper, Robert Shepherd was a young man who had been vice-captain of the 1972 All-Australian Schoolboys side after winning the J.L.Williams Medal as the best player at the national carnival.

He was runner-up in the 1974 Grogan Medal before heading to Fitzroy, but despite his brilliant 36th game and the enormous potential he’d shown at Fitzroy he wound up his AFL career at the end of the 1977 season.

Having averaged 19.1 possessions and 0.72 goals through 43 games, he grew tired of life in Melbourne and returned home, later finishing equal second in the 1980 Grogan Medal before an early retirement.

Now living in Sydney, Shepherd was an inaugural inductee to the Queensland Football Hall of Fame and a trail-blazer for the 30-possession Queenslanders who have followed.

Who are the other senior members of the exclusive 30-Plus Club in which Keays now finds himself?

Gold Coast Suns veteran Jarrod Harbrow has 13 – one less than Scott McIvor, a star at Fitzroy and Brisbane, and David Armitage, who played at StKilda.

Marcus Ashcroft is fourth on the list with 17 30+ games, while ex-Lions skipper Michael Voss and current Lions skipper Dayne Zorko each have 24.

A runaway leader in what is a pointer to how much the game has changed in recent years is ex-Collingwood and Brisbane star Dayne Beams. He had 64 30+ games in his 177-game career.

Consecutive 30+ games? Voss and Armitage each had a best of five, one behind Keays, while Beams had eight in a row in games 73-80 playing with Collingwood in his fourth season in 2012. It was part of an extraordinary run in which he had 16 in 18 games spread across 2011-12.

That Keays can sit alongside such stars of the Queensland game after being delisted by the Lions two years ago is part of a staggering transformation which sees him among the statistical leaders of a competition facing an uncertain short-term future amid growing Covid concerns.

Keays, averaging 28.7 possessions a game this season and hoping to make it seven in a row against his former side this weekend, is ninth in the League this year in total possessions and 22nd in contested possessions. Also, he’s 15th for clearances and 5th for tackles.

This is after he had 30 possessions (17 contested), four tackles, seven clearances, two goal assists and a goal in the Crows’ loss to Carlton.

Keays missed out in the Round 15 votes in the AFL Coach’s Association Player of the Year award, but three other Queenslanders didn’t.

Port Adelaide’s Charlie Dixon, underlining his importance to the Power in their push to the finals, received the maximum 10 votes in a home win over Sydney despite nursing an ankle problem through much of the last quarter. He had 19 possessions (13 contested), two goals, three contested marks and six hit-outs in his new role as Port’s back-up ruckman.

Also in Round 15, Gold Coast ruckman Zac Smith had the best game of his comeback with 13 possessions, a goal, 13 hit-outs, four tackles and four clearances against North in Hobart despite a heavy early hit from North’s Cam Zurhaar. He has since been ruled out of the Round 16 clash with Richmond with delayed concussion.

And Collingwood’s Josh Thomas impressed in his first game under caretaker coach Robert Harvey, helping himself to 14 possessions and two goals in the Pies’ loss to Fremantle.