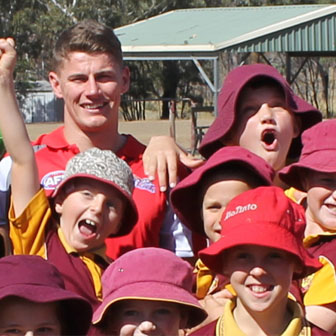 There’s no such thing as ‘taking it easy’ for Brisbane Lion Dayne Zorko, who used the club’s recent bye round to don his NAB AFL Auskick Queensland Ambassador hat for a visit to the Central Highlands.

Clermont State School rolled out the red carpet for the Lions star, who was guest of honour at a special NAB AFL Auskick clinic where he shared some of the skills that have earned him the nickname “the magician”.

Next stop was the Moranbah NAB branch where Dayne and the AFL crew met with Nadine Selby, a great supporter of AFL in the region.

But perhaps the greatest highlight was the NAB AFL Auskick Super Clinic at Moranbah Bulldogs AFC which attracted over 70 participants from across the region.
“We had families travel from as far away as Clermont, which is a 240 km round trip, “said AFL Queensland Auskick Coordinator David Noonan.

“The club volunteers were sensational in their support. They cooked the BBQ, cleaned the venue and the senior players actually ran the super clinic.

“The support of the local community was great and the club was so appreciative to have someone of Dyane’s profile make such an effort to be here.”

The super clinic wrapped up with a screening of a Dayne Zorko football highlights DVD, some final inspiration for those Auskickers who dream of someday playing on the big stage.

When first grader Lucas registered for NAB AFL Auskick in 2020, it was unlikely anybody, not even he, could have predicted what was about to unfold. Months... [more]

Six-year-old Max Monaghan from Heritage Park in Queensland has been named the 2019 NAB AFL Auskicker of the Year at an awards ceremony in Melbourne on Thursday... [more]