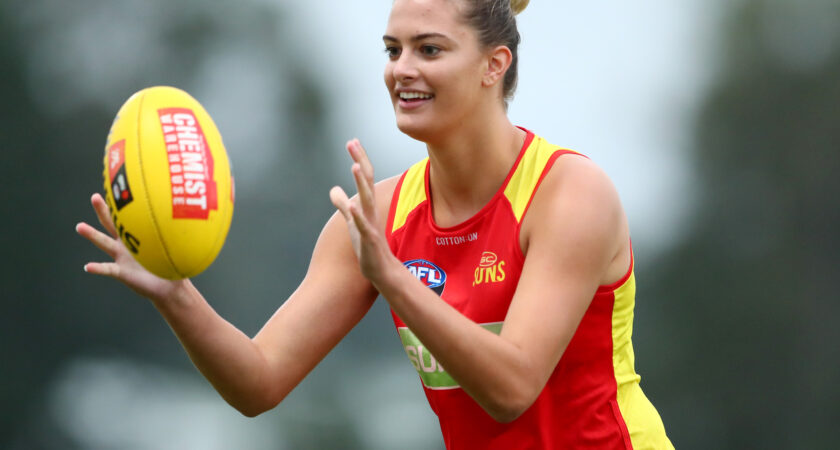 Young Gold Coast SUNS ruck Lauren Bella has been rewarded for her outstanding form this season with a NAB AFLW Rising Star nomination for Round 7.

Bella was dominant in the air collecting 25 hit-outs in the SUNS’ 15-point loss to Richmond on Friday night at Metricon Stadium.

The athletic Queenslander has put together her best season of AFLW to be the number one ruck in the competition for hit-outs at an average of 21 per game.

Bella is originally from Sarina, near Mackay in Queensland, and came through the Gold Coast SUNS and AFLW Academies. She was selected by the Brisbane Lions with pick 45 in the 2018 NAB AFL Women’s Draft after being named in the U18 All-Australian team two years in a row.

After playing three games for the Lions in 2019, she joined expansion club Gold Coast SUNS in their first season in the competition for the 2019/2020 season. The 20-year-old has played every game this season to be one of the SUNS best players.

“We think Lauren is one of the best rucks in the competition and it’s fitting to see her recognised with this nomination,” Lake said.

“She’s shown so much improvement in the last 12 months and has now developed her game further to become more effective across more parts of her game.

“What’s even more impressive is how resilient Lauren has become as a player and a person; she’s grown as she’s gotten older and is always open to learning and getting better which is really exciting for us going forward.”

All AFLW players 21 years and under as at 1 January 2021 and who have not previously been nominated as a rising star qualify for consideration for the award.

Two players will be nominated each week of the NAB AFL Women’s Competition. Each of the 18 NAB AFL Women’s Rising Star nominees throughout the season will be awarded $500 prize money from NAB to acknowledge their great achievement.

In addition, NAB will continue to support the development of future footy stars by awarding junior clubs of each nominee with a NAB Club Recognition Award pack of practical and financial resources, valued at $2000. Lauren Bella’s junior football club is Sarina Demons/Bakers Creek Tigers while Eliza McNamara played for East Malvern.

The overall NAB AFL Women’s Rising Star winner will be awarded $20,000 from NAB and a private banker to assist with securing their financial future.

NAB is proud to support the development of female footballers throughout the country from NAB AFL Auskick through to the NAB AFL Women’s Competition.

NAB has been supporting footy from grassroots to the elite level since 2002.