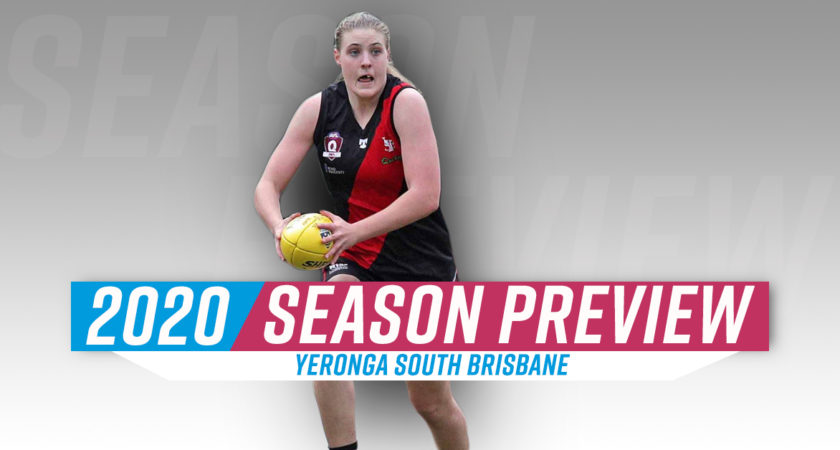 Yeronga improved vastly in their first season under new coach Aaron Russell. After their lean season in 2018 – their premiership defence – the Devils responded well and compiled a consistent season from top to bottom, finishing the home and away season in second place. Eventually, they would bow out of the finals somewhat prematurely against rivals Coorparoo in the Semi Final. Yeronga won three games in a row on two separate occasions last season but rounded out the campaign, including finals, with three straight losses. Emily Bates won the QAFLW Best and Fairest and was duly named in the QAFLW team of the year alongside Devils Jordan Zanchetta and Jade Ransfield.

Russell will return for his second season at the club and will be aided by the addition of club stalwart Ian Daniels, who will head up the Devils’ development team coaching panel. Accomplished SANFLW player Lexia Edwards will also form part of the side’s coaching panel.

Both Bellinger and Brisbane Lions teammate Lauren Arnell have both signed with Yeronga for the upcoming season however it’s unlikely the latter will play at QAFLW level. Bellinger, meanwhile, given the early season success of the Lions, is yet to feature at AFLW level and thus is likely to line up with the Devils throughout the season. Pick 21 in last year’s AFLW draft, the South Australian is strong over head and is known for her running capacity.

Zanker Close is a big signing for the Devils as they continue to bolster their defensive stocks and none were better in a Queensland jumper than Zanker Close in the defensive 50 last year. The former Bond University tall played in the QAFLW Grand Final but has since moved to pasture’s new as she looks toward the AFLW Draft. Zanker Close is strong in the air and was also vice-captain of Queensland in 2019.

Anderson has made the leap to QAFLW level after starring for Kedron in the Lions’ 2019 Division 2 North winning side. She played 14 games in the red and blue last season as she returned from a knee injury which cut short her 2018 season. A former Brisbane North representative in her youth days, Anderson has the opportunity to link up with former Brumbies teammate Jacqui Yorston at Leyshon Park.

They can hold their own against the big clubs, again. Despite Yeronga not making a deep finals run, it’s hard not to fault their 2019 season. In all, their season was quite remarkable, especially considering their form against the competition’s best teams. Bond University, the benchmark for most of the season, were beaten twice by Yeronga throughout the home and away season (the Bullsharks beat Yeronga in the finals), while the Devils also chalked up one win against Coorparoo. Any similar success this time around should see them do well once again.

Their fire power doesn’t fire. Yeronga were blessed with some of the competition’s best goal kickers in 2019 with Jade Ransfield (24 goals) shouldering most of the load inside 50. Ransfield finished fourth in the competition for majors but missed the final portion of the season through injury. Her absence on field almost coincided with the Devils’ run of losses to round out the season. In 2020, any sustained run toward finals and beyond must come with their goal kickers on the field.

When Emily Bates was a SUN: The game that underpins QClash
Craven to coach South Queensland for fifth time