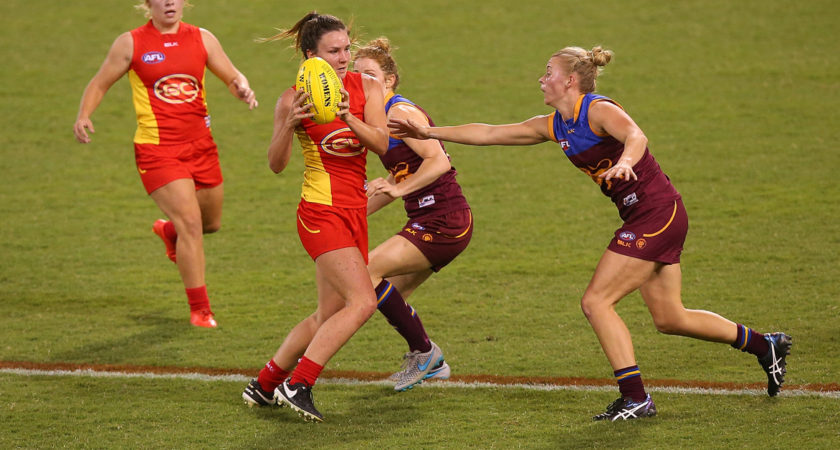 Before she was a Lion, Emily Bates was a Sun.

It may seem like an unlikely paradox of today’s reality, especially given Bates has been perhaps Brisbane’s best player at AFLW level, but it’s not.

In fact, the image of Bates donning the red and gold of Gold Coast not only predates her Lions career but it also underpins Queensland’s entire AFLW presence ahead of this weekend’s inaugural QClash.

That reality happened in 2016.

The AFL Women’s competition at this point was still a pipe dream. Then, the new competition was slated to commence in 2020 before being brought forward to the 2017 start date which we know today.

The National Women’s Championships had also ceased back in 2013, with women across the country now without any interstate competition as well.

So, to compensate, exhibition games around the country were staged, pitting the best talent in each state against each other. In Queensland, two exhibition games were held; one at the Gabba and one at Metricon Stadium.

Together, they organised representative games against West Australia, Tasmania and Melbourne, but it was throughout these Queensland-centric exhibition games which really spiked the enthusiasm within the wider public and became a catalyst for the eventual Brisbane AFLW franchise in 2017 and the Gold Coast franchise four years later.

Recounting the whirlwind of 2016, Brock said the exhibition games were aimed at giving the players the opportunity to play on the big stage. Everything else on top of that was a bonus.

“It was part of our initiative to get games on professional ovals because we had very little access to those venues before,” Brock told aflq.com.au.

“It was also part of the lead up to 2020 and trying to identify the players. We had sort of been in a good sport talent wise as AFL Queensland were quite progressive.”

The ‘Lions’ and ‘SUNS’ first hit-out would take place at the Gabba following QClash 11 – famous for that Steven May bump on Stefan Martin.

Trials were held, namely in the state’s south east, to identify the top female players with Brock and Starcevich naming a list of 50 names to take part. The players were split into the two teams not on the basis of geographical location or ties to academies but instead were divided on talent to ensure both teams were strong and like-for-like players would go head to head on opposing teams.

“We needed to make sure the contest was even,” Brock said.

“We didn’t want a blow out, we wanted a close contest and a good game.”

It was under these parameters which led to Bates wearing the SUNS colours, along with current Lions and Yeronga teammate Jordan Zanchetta.

At the Gabba, the Lions’ men’s team had just won out a gutsy QClash victory as makeshift ruck Josh Walker filled the void of the injured Martin to propel to the home side to victory. The win helped a crowd of over 4000 fans stick around to watch the curtain closer.

The crowd cheered on as Brisbane cruised to a 14-point win as Bates and Zanchetta amassed a combined 49 disposals together. The two went head to head with current teammates Emma Zielke, who had 21 disposals and four tackles, and Ally Anderson.

The game was also memorable for the exploits of the relatively unknown Tayla Harris too. Playing all over the ground, Harris marked her 19th birthday with 16 disposals but was uncharacteristically overwhelmed by the occasion with the 4000-strong crowd in the stands.

While a lot of things have changed since that contest, some things didn’t. For one, Kate Lutkins was named the Lions’ best player, while shuffling the magnets in the coaches box for the SUNS was David Lake.

Both teams featured a plethora of now-AFLW regulars including Jordan Membrey, Selina Priest as well as former players in Jade Ransfield and Nikki Wallace.

The two-game series was a significant moment in itself but the games also acted as a selection process for a combined ‘Brisbane Lions’ team which travelled to face Melbourne at the MCG on May 22.

While that Brisbane team suffered a significant 70-point loss to the Demons that day, largely thanks to a six-goal haul from Jess Duffin, the positive indications from the game were transcendent.

Of the 23 players who featured in the contest, 16 would go on to play AFL Women’s football in the four seasons that have followed.

For Brock, the exhibition games, along with the contest in Melbourne, were landmarks in the journey to the present where women’s football in Queensland is in the current environment with two flourishing AFLW franchises.

“What it did do was it started to spark interest,” she said.

“I suppose back them and we’re only talking a few short years ago, people were still saying ‘ugh do girls play’. “It definitely wasn’t spoken in the same manner it is spoken about now.

“You think of how much we have done in three seasons and how much it has changed the face of football.

“It was exciting because we were doing stuff we hadn’t done before. The game against Melbourne was on Foxtel which was the first time we had ever been on TV.”

The pathway soon began to become more and more visible. It often began with players being named in the Queensland state teams which would then compete against other states in exhibition series. Their performances across those games would then be rewarded with selection at these intra-state exhibition games and from that, the players and the aura of women’s football began to spread.

When the AFL decided to bring forward the commencement date of a new AFL Women’s competition on June 14, 2016 – less than a month following the Lions’ game at the MCG and around two months following the initial game at the Gabba, Queensland football was already in a strong place.

Given these games, it’s no surprise that the Lions enjoyed such success in the formative years of the AFLW competition and have remained competitive throughout the ensuing years despite a high turnover of player personnel.

“Because we were doing these sorts of things, we knew within our state what we had so we were probably more ahead of other states,” Brock said.

“We knew there was enough talent to compete with a Victoria cohort than would be split in four.

“We still brough in some interstate players that certainly helped us but we had been working towards that for a long period of time.”

Obviously, a lot has changed both in Queensland and nationally since those initial games have taken place and a new chapter is ready to be written when the Lions and SUNS face off, just as they had done six years ago, although there is a lot more at stake this time.

The first ever QClash is more than just a tagline for two Queensland franchises. The game is the culmination of not just months of preseason training but years upon years of sacrifice and dedication by people like Brock and Gold Coast Head of Women’s Football, Fi McLarty, to make this weekend’s contest possible.

And while there has been a lot said about the building rivalry between the two teams, it’s important to remember how far it has come and the work that has gone into making it all happen.

That is what QClash is really about, and Brock tends to agree.

“I’m sort of looking at it a little bit differently, yeah we can go into the rivalry stuff but this is an opportunity for both of our clubs to showcase the talent that is in their state.”

“I think that’s the bigger take out from this weekend.

“How good is it to be a girl playing footy in Queensland?!”