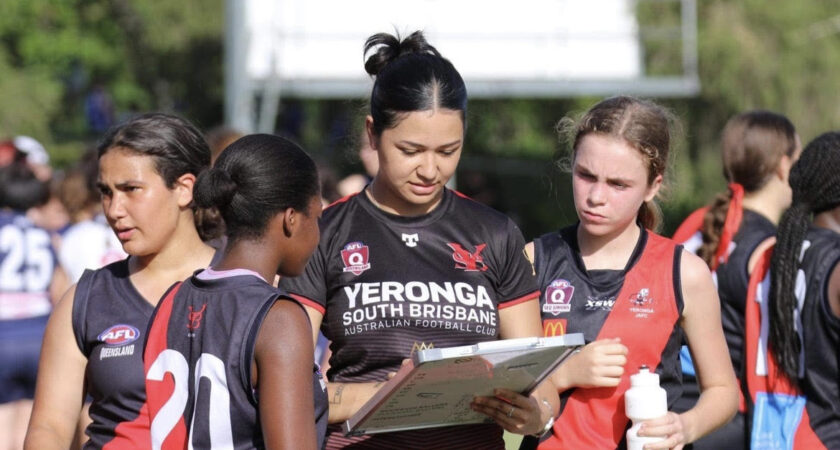 2022 saw the Yeronga Devils launch a youth female football program, which ensured all girls youth teams had a female coach.

The initiative was aimed to leverage the benefits of positive female role models whilst also providing dedicated opportunities for females within the footy arena.

Following the launch of this exciting and unique initiative, Yeronga has seen tremendous growth in female participation.

Since introducing the new program, Yeronga has recorded a 103% increase in female youth aged players registered at the club in comparison to the previous year. This has meant Yeronga have introduced five additional girls’ teams in 2022.

Yeronga’s Female Football Coordinator, Necole Wolf, said that she was thrilled to launch the program.

“We know that same sex role models positively influence self-perception and provide powerful representation in what has always been a male dominated space,” she said.

“From this opportunity, we acknowledged the need to support and develop the new and emerging coaches. This was to not only ensure their enjoyment in the role, but also, where there is interest, provide opportunities for advancement in their coaching future.

“Within the program we have four volunteer coaching and mentor support roles – two of which are filled by the senior women’s squad line coaches, in addition to two dedicated youth female football coordinators, as well as traditional team volunteer roles.

“We’ve had enormous support from Jack Barry, Coaching Development and Education Lead at AFL Queensland in working with the coaches and providing feedback and opportunities.

“A key to our success is also undoubtedly the relationship we’ve built with our Senior Club QAFLW Head Coach, Lexia Edwards. This has been pivotal across the program for opportunities, mentoring and relationships.

“We want to build this into a female coaching academy where coaches can grow, hone skills, and move onto higher or more senior roles. We’d love to see some of our coaches go into AFLW coaching careers!”