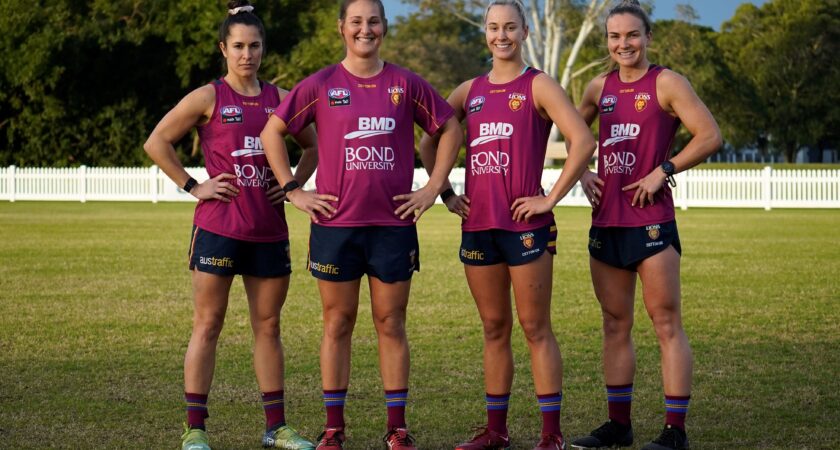 The Brisbane Lions AFLW team have announced their 2022 Leadership team with Breanna Koenen back as Captain, Natalie Grider as Vice-Captain for the first time and Emily Bates and Ally Anderson retaining their roles within the group. The four will lead the team in their hunt for a second premiership in AFLW Season Seven, which commences in August.

This will be Koenen’s second season as Captain. Head Coach Craig Starcevich said the Magnetic Island local will build upon what she learned in her first year.

“She has a lot of really great attributes,” he said.

“Her empathy for her teammates is super strong and she is selfless in her role play on game day. Those sorts of things are good qualities as a leader.”

All four members of the leadership group are Queensland athletes and all four starred in AFL Queensland’s QAFLW league before being selected in the AFLW Draft. Koenen and Grider played for the University of Queensland, Bates for the Yeronga South Brisbane Devils and Anderson for Coorparoo.

The Lions list now boasts 28 of the possible 32 players coming from Queensland. Starcevich said the QAFLW competition has played a huge role in their recruitment process.

“It’s fantastic. We trust the competition,” he said.

“The QAFLW is a very strong state-league and we trust the quality of player coming through.”

Koenen said the QAFLW played a huge role in where she is now in her career.

“The QAFLW competition is now a natural pathway to AFLW,” she said.

“It’s just growing every year. You can see how much input the players have put into it.”

Grider said that the Queensland pathway from grassroots to AFLW was strong.

“Whether Queensland is the heart of AFL footy or not, we love it and we have built such a good group off the talent available here.”

The Brisbane Lions start their AFLW Season Seven campaign at The Gabba against Fremantle on Sunday 28 August at 2:10pm.