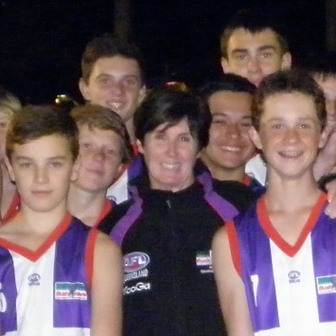 President of South Eastern Bushrangers AFC and U14 Team Manager

What does your role involve?
Assisting the Area Development Manager in presenting the representative football program to our local community.

How long have you been involved in AFL?
Apart from watching my husband play football years ago, we became involved in Queensland  junior football in 1992.

How did you first become involved in AFL?
Our 3 boys played junior football and husband coached.  So it was probably a “if you can’t beat them, join them” matter.  There is always help needed at that level and I first became a team manager in 1994 progressing to being a committee member/manager.

What is the greatest challenge you have faced in your role?
Having enough time to do all the jobs that need doing.

What has been your greatest achievement?
Probably when I was on the first Draws Committee of the BJAFL in 1996.  The draws were all hand written and re written week after week with teams coming in and out.  At the end of that first year I did a basic little computer program where the season filled in automatically after entering the first round (for all 6 – 16 team comps).  Certainly made the following 3 years more time efficient. And I think it was shared around. Hallelujah!

What has been the most rewarding thing about working in football?
Seeing the players enjoying themselves – they’ll all great kids. Making friends. When things go off without a hitch!  When I see boys, now young men, that I was team manager to from years past and they are pleased to see me.

Do you think being a woman helps you to bring a different perspective to your role and/or organisation?
Absolutely, especially when involved in junior football.  I think women cross the “t”s and dot the “i”s to deliver a rounded and considerate experience for the families involved.

What do hope to achieve in football?
I hope to assist in delivering an enjoyable, efficient and professional standard of service to the players and parents passing through the program.

Who inspires you and why?
In the football world, volunteers who have been with clubs for decades just giving their time unreservedly.  Dedication!  In my other world, a sculptural knitter named Loani Prior who is in the midst of conquering the world with really wild tea cosies.  From small ideas big things grow.

What advice would you give to other women hoping to work in AFL?
Be prepared to be a team player, take the initiative and trust in your instincts.

Why do you think it is important to have women in football?
The football community is a part of everyday life and we need both men and women to contribute their best attributes to maintain balance.

What do you see in the future for women in football?
I see women increasingly being represented in all levels and aspects of football.  Women have served well in the grassroots for a long time and that is now starting to filter upwards.  The AFL realise and appreciate the importance of their contributions.

What is the most important attribute in a leader?
I think a leader needs to make every person in the team feel like they are involved, appreciated and needed.  Also, it is important to lead in the actual work whilst seeking assistance.

Is there anything else you would like to add?
I would like to thank all the people who have assisted and supported me over the years.  Also, my family who have had to fend for themselves quite often.  A friend said I should put “Feel like a full forward but act like a rover most of the time” so I’ll include that as a pretty good summation.  (And to all coaching staff – don’t forget to shake the women’s hands too).