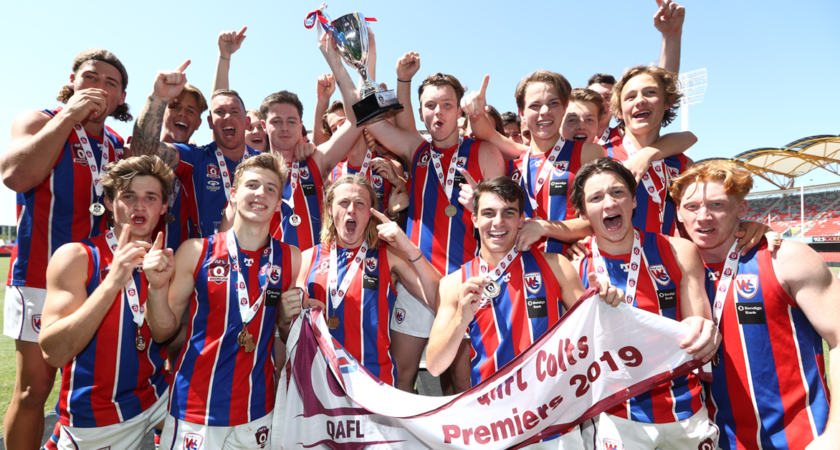 Wilston Grange has produced a miraculous comeback to win the QAFL Colts Premiership in a thrilling five-point affair against Palm Beach Currumbin.

The Gorillas trailed at every break but always loomed ominously, leaving their tile for the title until the eleventh hour.

The north Brisbane club trailed by as much as 23-points earlier in the third term but booted five goals to three in the second half to win 7.11 (53) to 7.13 (55) at Metricon Stadium.

Gorillas smooth mover Tyler Galligan, who was also judged best afield in the win, kicked the winner 17 minutes into the final term to push the Gorillas past the Lions to seal the dream premiership comeback.

For most of the game though, it was Palm Beach Currumbin who looked the better side and often looked like the side more willing to kick a score – a notion earned in the opening minutes of the game.

The Lions etched an early lead in the contest, dominating the clearances in the opening minutes to produce countless inside 50.

Their early dominance was rewarded too as the Lions piled on the first four goals of the game to establish a handy lead before the Gorillas could even manage to blink.

To their credit though, the Gorillas soon found their footing in the contest and kicked their first in the 16th minutes via Gracen Sproule.

With a 16-point lead at the first exchange, the Lions continued to produce ample scoring opportunities but their success at the goal face soon dried up.

The minor premiers booted five behinds for the term and in doing so, opened the door for Wilston Grange to reassert themselves and peg back the lead.

And the Gorillas did just that.

Under 16 Queensland representative Noah McFadyen kick cut the lead early in the second term but the margin at the main break remained slightly in the Lions favour – 12-points.

In the third, Palm Beach Currumbin – like they had for most of the game – threatened to open the game up early.

The Lions booted two early majors to extend their lead to 17-points.

From there though, the Gorillas remarkably found some run and carry and peppered their forwards with plenty of their own opportunities.

Wilston Grange booted three of the final four goals of the term to cull the lead once.

With a premiership on the line, neither side could break through in the final term despite opportunities at both ends of the ground.

Wilston Grange appeared the most likely

A genuine arm wrestle ensued and it was the Gorillas who appeared the most likely to score but a flurry of behinds restricted them from ensuring the cup would go back to Hickey Park.

Despite their misses, the Gorillas finally broke the drought as Noah McFadyen dribbled his third goal of the game halfway through the term.

Still, the Gorillas trailed but Galligan’s game-winner sailed through to hand them a handy three-point lead where they hung on to prevail by two-points.

McDonald’s South East Queensland Juniors have smashed their expected forecast for registrations this season, with a record amount of kids signing up to... [more]